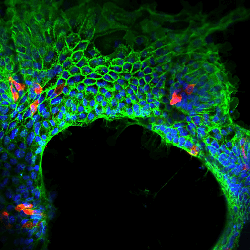 Working with gut stem cells from humans and mice, scientists from the Johns Hopkins Children’s Center and the University of Pittsburgh have successfully grown healthy intestine atop a 3-D scaffold made of a substance used in surgical sutures.

In a further step that takes their work well beyond proof of concept, researchers report their laboratory-created intestine successfully regenerated gut tissue in the colons of dogs with missing gut lining.

The experiments, described ahead of print in the journal Regenerative Medicine, bring researchers closer to creating an implantable intestine as replacement therapy for a range of devastating disorders — including infections, cancer and trauma — that result in loss or death of gut tissue. Chief among them is a condition that affects 12 percent of premature newborns, called necrotizing enterocolitis (NEC), which is marked by the rapid death of intestinal cells and permanent loss of intestinal tissue.

The tube-shaped scaffold, designed several years ago in collaboration with Cornell University researchers and composed of biodegradable material similar to that used in surgical sutures, was a big first step on the quest to develop an implantable replacement intestine. But the new work pushes that effort further because it shows how stem cells, when mixed with immune and connective tissue cells, can grow into normal gut tissue around the scaffold and function inside a living mammal.

Researchers caution that a fully functioning replacement intestine for humans is far off, but they say their results have laid the critical groundwork to do so.

“Our experiments show that the architecture and function of our lab-made intestine strikingly resemble those of the healthy human gut, giving us real hope that our model could be used as the backbone for replacement intestine,” says principal investigator David Hackam, M.D., Ph.D., the Johns Hopkins Children’s Center’s surgeon-in-chief, who initiated and conducted most of the work at the University of Pittsburgh.

In an initial set of experiments reminiscent of a peanut butter-and-jelly sandwich technique, researchers took stem cells from the colons of babies undergoing intestinal surgeries and from mice, then added immune cells called macrophages, the body’s scavengers that seek out and engulf debris along with foreign and diseased cells. To this mix, they added cells called fibroblasts, whose function is to form collagen and other connective substances that bind tissues and organs together. The idea, the scientists say, was to create a mixture that closely mimics the natural composition of the gut.

“Intestinal cells do not grow and develop in a vacuum, so we sought to recreate the richness of the human gut, Hackam says. “We took the PB & J approach, adding a layer of stem cells on top of the scaffold, then topping them with a mixture of immune and collagen cells.”

Adding these components, they report, enhanced the growth of intestinal stem cells and differentiation into various mature cell types critical to the function of a healthy intestine. In comparison, stem cells grown in isolation without immune and connective cells in the mix grew more slowly and failed to differentiate well into multiple cell types.

In another set of experiments, researchers added probiotic bacteria to the newly created intestinal tissue. Doing so further amplified the growth and differentiation of new gut cells, specifically the growth of Paneth cells responsible for production of infection-fighting proteins that guard against intestinal infections, Hackam says, a finding that highlights the therapeutic potential of certain probiotics for NEC. Next, the team added bacteria-laden stool cells obtained from infants with NEC, but they observed a dramatic decrease in the number of intestinal cells called goblet cells, which are responsible for the production of protective mucus that coats and shields the intestine — a common occurrence in NEC. The observation, Hackam says, supports the notion that certain gut bacteria present in the colons of babies with NEC are responsible for sparking the rapid death of gut tissue that occurs in the condition.

In a final step, the investigators implanted pieces of the newly created intestine — about 1.6 inches in length — into the lower portion of dog colons lacking parts of their intestinal lining. For two months, the dogs underwent periodic colonoscopies and intestinal biopsies. Strikingly, the guts of dogs with implanted intestines healed completely within eight weeks. By contrast, dogs that didn’t get intestinal implants experienced continued inflammation and scarring of their guts.

“Our results move research beyond the proof-of-concept realm,” says study author Stephen Badylak, D.V.M., Ph.D., M.D., professor of surgery and deputy director of the McGowan Institute for Regenerative Medicine at the University of Pittsburgh. “These results demonstrate that a mixture of synthetic and natural tissue can spur the formation of new gut cells and function well in living organisms despite the presence of naturally occurring inflammation and microbes found in the living gut.”

Other investigators involved in the study included Hongpeng Jia and Chhinder Sodhi of Johns Hopkins; Timothy Keane, Maria Quidgley, Jenna Dziki, Stephen Badylak and Deena Wasserman of the University of Pittsburgh; and John March and Cait Costello of Cornell University.

The work was funded by a Hartwell Biomedical Collaborative Research Award with additional support from National Institutes of Health grants R01GM078238 and RO1DK08752.