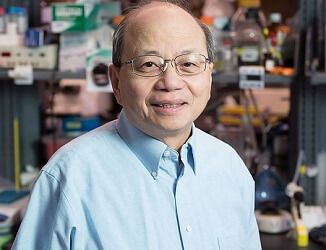 The International Society for Eye Research (ISER) has named King-Wai Yau, Ph.D., professor of neuroscience and ophthalmology at the Johns Hopkins University School of Medicine, as the 2016 recipient of the Retina Research Foundation Kayser International Award in Retina Research. The award will be presented at ISER’s 2016 Biennial Meeting in Tokyo in September. The award recognizes Yau’s contributions to the understanding of retinal functions in health and disease.

“King is a pioneer in vision research and has played a key role in expanding the breadth and depth of our understanding of retinal functions. It is great to see him recognized by ISER,” says Richard L. Huganir, Ph.D., director of the Department of Neuroscience at the Johns Hopkins University School of Medicine.

Yau’s research focuses on the flow of molecular signals that are important to sight and smell. His discoveries have helped advance understanding of many hereditary blinding diseases that affect the rod and cone cells in the eye. He also characterized the light response behaviors of a newly discovered cell type that responds to light and affects circadian rhythms and other nonimage-forming visual functions. Yau has received many awards throughout his career, such as the National Academy of Sciences’ 2013 Alexander Hollaender Award in Biophysics, the 2008 António Champalimaud  Vision Award (jointly with Jeremy Nathans, M.D., Ph.D.), and Alcon Research Institute grants in 1994 and 2005, among others.