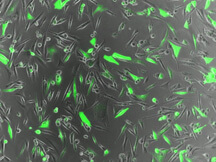 Researchers at the Johns Hopkins University School of Medicine have developed a technique that delivers gene therapy into human brain cancer cells using nanoparticles that can be freeze-dried and stored for up to three months prior to use.

The shelf-stable particles may obviate the need for virus-mediated gene therapy, which has been associated with safety concerns. The report appears in the August issue of Biomaterials.

"Most nonviral gene therapy methods have very low efficacy," says Jordan Green, Ph.D., an assistant professor of biomedical engineering at Johns Hopkins. "Nanoparticle-based gene therapy has the potential to be both safer and more effective than conventional chemical therapies for the treatment of cancer."

To develop the nanoparticle, Green's team started with store-bought small molecules and systematically mixed combinations together to generate chemical reactions that resulted in different polymers. They then mixed DNA that encodes a glowing protein with each different polymer to allow the DNA to bind to the polymers and form nanoparticles. Each different sample was added to human brain tumor cells and human brain tumor stem cells. After 48 hours, the team examined and counted how many cells glowed from having taken up the nanoparticles and made the glowing protein encoded by the introduced DNA.

The team rated success by counting how many cells survived and what percentage of those cells glowed.

Of the many combinations they tested, the researchers found that one particular formulation of so-called poly(beta-amino ester) nanoparticles did particularly well at getting into both glioblastoma and brain tumor stem cells. The researchers then freeze-dried these nanoparticles and stored them at different temperatures (freezer, refrigerator and room temperature) for different lengths of time (one, two and up to three months), and then retested their ability to get into cells. According to Green, after six months in storage, the effectiveness dropped by about half, but they found that up to three months of storage at room temperature there was virtually no change in effectiveness.

Furthermore, the team found that certain nanoparticles had a particular affinity for brain tumor cells over healthy brain cells.

"I could imagine particles based on this technology being used in conjunction with, and even instead of brain surgery," says Alfredo Quinones-Hinojosa, M.D., Ph.D., an associate professor of neurosurgery and oncology at Johns Hopkins. "I envision that one day, as we understand the etiology and progression of brain cancer, we will be able to use these nanoparticles even before doing surgery-how nice would that be?  Imagine avoiding brain surgery altogether."

This study was funded by the Institute for NanoBioTechnology at The Johns Hopkins University, the Maryland Stem Cell Research Fund, National Institutes of Health, the Howard Hughes Medical Institute and the Robert Wood Johnson Foundation.