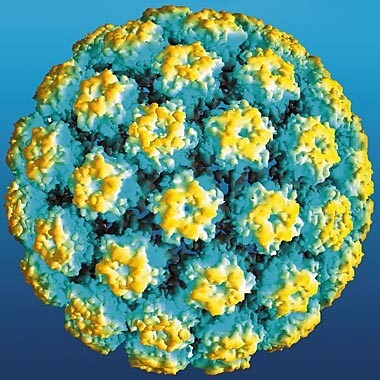 A look-back analysis of HPV infection antibodies in patients treated for oropharyngeal (mouth and throat) cancers linked to HPV infection suggests at least one of the antibodies could be useful in identifying those at risk for a recurrence of the cancer, say scientists at the Johns Hopkins University. A report on the study is published in the February issue of Cancer Prevention Research.
HPV infections, which are virtually all sexually transmitted, are responsible for the recent rise in the incidence of oropharyngeal cancers in the United States, according to the National Cancer Institute, and now account for about 80 percent of these cancers.
People with HPV-positive tumors of the throat, base of the tongue and tonsils have higher overall survival rates compared to people with similar tumors not caused by HPV, but studies show that more than 25 percent of HPV-positive cancers recur—usually within the first two years after treatment.
“There are currently no reliable tests available to detect early recurrence, so we hope to find a biological marker that could help identify those most at risk,” says Carole Fakhry, M.D., M.P.H., associate professor of otolaryngology–head and neck surgery at the Johns Hopkins University School of Medicine and member of the Johns Hopkins Kimmel Cancer Center.
For the new study, Fakhry and her colleagues focused their attention on the antibodies, or immune system protein the body produces to fight HPV-related cancer proteins. One such antibody, called E6, is strongly linked to the diagnosis of HPV-positive oropharyngeal cancer.
Levels of the E6 antibody should fall when a patient is treated and cured of their cancer, Fakhry and her colleagues reasoned, so an increase in a patient’s E6 levels after treatment might indicate a higher risk of the cancer returning.
To find out, the researchers looked back at the health records and blood serum samples of 60 patients with HPV-positive oropharyngeal cancer and a median age of 56, mostly Caucasian men, who were treated at The Johns Hopkins Hospital. Some 43 of the patients had samples taken before their treatment, 34 had samples taken up to six months after therapy, and 52 had samples taken six months or later after therapy. Among the 60 patients, Fakhry and colleagues identified six cases of recurring cancer within an average of 4.4 years of follow-up after treatment.
The scientists looked at a variety of HPV cancer cell antibodies in these patients and discovered that the average level of most of these antibodies was lower after treatment. Patients who had high levels of E6 antibody before their treatment were seven times more likely than those with lower levels to have their cancer return, they also found.
Fakhry says the study is a promising start toward finding a way to identify patients most at risk for a cancer recurrence through the use of a blood test, but much more data are needed to confirm E6’s usefulness as a biomarker. One of the best ways to proceed, she says, would be to conduct a study of the antibody on a large group of patients at the start of their treatment, drawing blood at a series of predetermined points during their therapy to examine E6 levels.
At the moment, these HPV antibodies are not measured routinely in patients, so it is difficult to estimate the costs and time needed to conduct such a “gold-standard” trial, she notes.
More research is also needed to know whether such tests would be useful in determining the path of a patient’s follow-up care, such as whether and how often a patient might need imaging or clinical exams to watch for a cancer’s possible return.
“Potentially, a low-risk patient may need less stringent surveillance while a high-risk patient may require more intense imaging,” Fakhry explains. “But this is far away from clinical practice, as we would really need to understand whether this hypothetical approach [with E6] would improve lead time to diagnosis of recurrence and survival outcomes.”
Other Johns Hopkins scientists who contributed to the research include Jesse Qualliotine, Zhe Zhang, Nishant Agrawal, Daria Gaykalova, Justin Bishop, Rathan M. Subramaniam, Wayne Koch, Christine Chung, David W. Eisele, Joseph Califano and Raphael P. Viscidi.
Funding for the study was provided by the Oral Cancer Foundation and the National Institute of Dental and Craniofacial Research (P50DE019032-13).
Return to Top