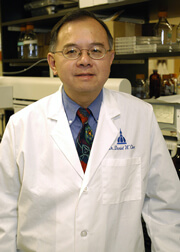 The National Cancer Institute (NCI) has chosen Johns Hopkins as one of five centers to participate in a coordinated effort to develop a catalog of proteins created by cancer cells.  The information, which will be made available to other researchers, could be used to develop new ways to detect cancer and treat the disease.

The network, called the Clinical Proteomic Tumor Analysis Consortium (CPTAC), will leverage information already revealed about cancer genes through the Human Genome Project and The Cancer Genome Atlas (TCGA) network to predict proteins produced by tumors.  Principal investigator, Daniel W. Chan, Ph.D., professor of pathology, oncology, radiology, and urology and director of Hopkins’ Biomarker Discovery Center, says that protein signatures can be used to spot cancer or its recurrence in patients and as potential targets for new therapies.  The information can be combined with genetic information from patients to create a complete picture of cancer.

Chan says the Johns Hopkins team will focus on ovarian cancer and expects to receive $2 million annually for five years from the NCI.  The Hopkins team includes clinicians and researchers with expertise in cancer biology, genomics and proteomic technologies, bioinformatics and biostatistics, pathology and clinical chemistry. The team will also look for changes to existing proteins in cancer cells and identify protein-protein interaction. “Further understanding of the biology of cancer will be the key to detecting and treating it,” says Chan.

Chan’s team will use a device called a mass spectrometer to find proteins in tiny amounts of tissue or body fluid, based on the protein’s weight or “mass.”  Other tools to locate and identify proteins include antibodies and aptamers, which bind to proteins, and, microarrays, in which microscopic bits of protein are affixed on glass trays.

In addition to Johns Hopkins, the consortium will include four collaborative centers at The Broad Institute and Fred Hutchinson Cancer Research Center; Pacific Northwest National Laboratory; Vanderbilt University; and Washington University, the University of North Carolina, and Boise State University.