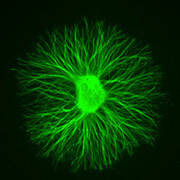 A spinal cord nerve cell--cervical ganglion--grown in culture in the presence of Nerve Growth Factor (NGF). Sympathetic neurons like these require NGF for growth and survival. The Ginty lab uses uses cultured sympathetic neurons to study the mechanism of action of NGF.
David Ginty's laboratory

Nerve cells that regulate everything from heart muscle to salivary glands send out projections known as axons to their targets. By way of these axonal processes, neurons control target function and receive molecular signals from targets that return to the cell body to support cell survival. Now, Johns Hopkins researchers have revealed a molecular mechanism that allows a signal from the target to return to the cell body and fulfill its neuron-sustaining mission.

The discovery, reported August 5 in the journal Cell, reveals that the activated protein Rac, a key component of signals that make it all the way back to home base, is absent in signals  that don’t return to the cell body.

“Defective transport processes along axons may be contributing factors in a variety of neurodegenerative diseases, such as ALS, Parkinson’s and Alzheimer’s,” says David Ginty, Ph.D., a professor in The Solomon H. Snyder Department of Neuroscience, Johns Hopkins University School of Medicine, and an investigator of the Howard Hughes Medical Institute. “By comparing signals that make it all the way back to the cell body with those that cannot, we gain an appreciation of the workings of the microtubule network inside of axons and the mechanisms of retrograde transport of key neuronal survival signals.”

Using mouse neurons from ganglia that line the spinal column, the scientists figured out the signal known as nerve growth factor (NGF), which is made in the target field and travels along the axon to the command center of the cell, the cell body. Separately they found that a related signal known as NT3, which, though it helps axons grow along their intermediate targets, doesn’t support travel of a survival signal back to the cell body.

The team then analyzed all the protein components of NGF signaling for the purpose of pinpointing the key component that supports long-range signaling and neuronal survival. Present in NGF signals, yet conspicuously missing from NT3, was Rac, a protein that regulates components of the cytoskeletal roadway along which molecular machinery assembles cargo to be moved up the axon toward a target tissue or back down to the cell body.

In a series of experiments using mouse neurons in special dishes with separate chambers through which axons could extend and be treated with different growth factors, the team added an active form of Rac to the NT3 signals and saw that this was enough to coax them back to the cell body and deliver cell survival messages. Next, they removed Rac from the NGF signal and showed that its elimination prevented it from making the trip to the cell body and supporting survival.

Because neurons die in mice that are engineered to lack either NT3 or NGF, conventional wisdom held that both NFG and NT3 are so-called survival factors.  This new work reveals an important if subtle distinction between the two by showing how and why NGF –but not NT3—is capable of making the long trip to the cell body to support neuron survival.

Support for this research came from the National Institutes of Health and The Silvio Conte Center for Neuroscience Research.

Related Stories:
Killer Competition: Neurons Duke It Out for Survival