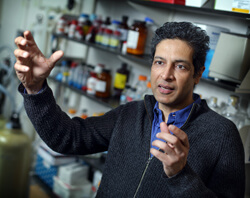 Working with mice and human blood and liver samples, scientists from the Johns Hopkins Children’s Center have identified a previously unsuspected liver hormone as a critical player in the development of type 2 diabetes, a condition that affects nearly 26 million people in the United States and is a leading cause of heart disease and stroke, as well as kidney, nerve and eye damage.

Results of the research, to be published April 1 in the journal Cell Metabolism, show that the hormone, kisspeptin 1, or K1 — up until now known for its regulation of puberty and fertility — also slows down the production of insulin, the sugar-regulating hormone secreted by the pancreas, and in doing so fuels the development of type 2 diabetes.

The findings provide what researchers consider a missing link in understanding the origins of type 2 diabetes. Two hormones, glucagon and insulin, must work in synchrony to maintain healthy sugar levels in the bloodstream. Secreted when sugar levels drop, glucagon causes the liver to release its strategic reserves of glucose into the bloodstream. When sugar levels rise, insulin acts as an antidote to glucagon, helping the body lower blood sugar by transporting it out of the bloodstream and into organs and tissues as fuel. In type 2 diabetes, pancreatic cells secrete too little or no insulin at all, leading to a dangerous buildup of sugar in the blood. People with type 2 diabetes and those with early forms of the disease known as pre-diabetes have abnormally high levels of the sugar-boosting hormone glucagon even in the presence of insulin and even when the body doesn’t need more sugar. Researchers have long wondered if abnormal glucagon levels somehow affect the insulin-secreting cells of the pancreas. The prevailing wisdom has been that exposure to chronically elevated glucagon and blood sugar levels take a gradual toll on the pancreas, and its overworked beta cells slowly decrease insulin output until they stop making insulin altogether.

The new findings, however, show that the pancreatic cells don’t just get tired; their function is directly suppressed by K1. Specifically, the researchers found that the liver, stimulated by high levels of glucagon, releases K1 into the bloodstream. K1 then homes in on pancreatic beta cells, where it suppresses insulin secretion.

“Our findings suggest that glucagon issues the command, but K1 carries out the orders, and in doing, so it appears to be the very cause of the declining insulin secretion seen in type 2 diabetes,” says lead investigator Mehboob Hussain, M.D., an endocrinologist and metabolism expert at the Johns Hopkins Children’s Center.

“Glucagon and insulin alone never really made complete sense,” Hussain adds. “There was always something missing and, we feel, kisspeptin 1 is a very good candidate to be that missing part. All our findings point in this direction.”

In one set of experiments, the researchers fattened a group of mice by feeding them calorie-rich food. Predictably, the mice developed diabetes, their insulin production declined and K1 levels in their blood shot up, the researchers found. When the investigators chemically altered the livers of the diabetic mice to make them incapable of K1 production, the animals’ insulin levels returned to healthy ranges. Next, the researchers engineered mice whose pancreatic cells were lacking receptors for K1. Those mice, even when they feasted on high-fat food, maintained healthy insulin production and blood sugar levels. In other words, the missing K1 receptor rendered these animals’ insulin-secreting cells immune to the effects of K1.

The identification of K1 as a key player in diabetes, the research team says, offers a possible new treatment target that can lead to the development of drugs that restore the function of the insulin-secreting cells. Currently, diabetes therapy is based on injecting synthetic insulin to maintain blood sugar levels. However, restoring natural insulin production could, in theory, cure diabetes, instead of simply mitigating its symptoms.

The Johns Hopkins team says it has already identified a hormone-like substance that blocks the K1 receptor in the pancreatic cells of mice. The investigators will next study whether this receptor-blocker can restore the function of human pancreatic cells.

The identification of K1 also makes evolutionary sense, Hussain adds, and may explain why diabetes is an ancient disease common across species. Hussain and colleagues believe that K1 may have evolved to play an insulin-blunting role and prevent sharp falls in sugar levels during fight-or-flight situations.

“Sugar provides critical fuel when an animal enters combat or is trying to run away from a predator,” Hussain says. “The high levels of insulin after a meal can cause dangerously low levels of blood sugar, which would render the animal weak and vulnerable. So our theory is that K1 is a defense mechanism that halts the sugar-reducing effects of insulin in such life-and-death situations.”

Type 2 diabetes, which is closely associated with high-fat and high-sugar diets and sedentary lifestyles, is the predominant form of the disease, accounting for more than 90 percent of all diabetes cases. While previously seen mostly in middle-aged and older adults, type 2 diabetes is now increasingly common in younger people and children, a phenomenon fueled by growing obesity rates, experts say.

Researchers from other institutions included Emily A. Farber, Charles R. Farber and Stephen Turner, of the School of Medicine at the University of Virginia, and Laura Alonso of the University of Massachusetts Medical School.