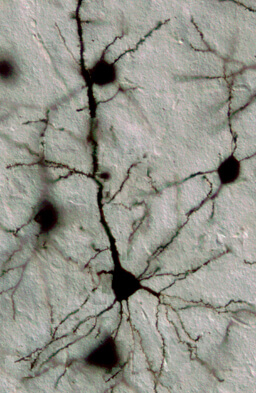 By combining a research technique that dates back 136 years with modern molecular genetics, a Johns Hopkins neuroscientist has been able to see how a mammal’s brain shrewdly revisits and reuses the same molecular cues to control the complex design of its circuits.

Details of the observation in lab mice, published Dec. 24 in Nature, reveal that semaphorin, a protein found in the developing nervous system that guides filament-like processes, called axons, from nerve cells to their appropriate targets during embryonic life, apparently assumes an entirely different role later on, once axons reach their targets. In postnatal development and adulthood, semaphorins appear to be regulating the creation of synapses — those connections that chemically link nerve cells.

“With this discovery we’re able to understand how semaphorins regulate the number of synapses and their distribution in the part of the brain involved in conscious thought,” says David Ginty, Ph.D., a professor in the neuroscience department at the Johns Hopkins University School of Medicine and a Howard Hughes Medical Institute investigator. “It’s a major step forward, we believe, in our understanding of the assembly of neural circuits that underlie behavior.”

Because the brain’s activity is determined by how and where these connections form, Ginty says that semaphorin’s newly defined role could have an impact on how scientists think about the early origins of autism, schizophrenia, epilepsy and other neurological disorders.

The discovery came as a surprise finding in studies by the Johns Hopkins team to figure out how nerve cells develop axons, which project information from the cells, as well as dendrites, which essentially bring information in. Because earlier work from the Johns Hopkins labs of Ginty and Alex Kolodkin, Ph.D., showed that semaphorins affect axon trajectory and growth, they suspected that perhaps these guidance molecules might have some involvement with dendrites.

Kolodkin, a professor in the neuroscience department at Johns Hopkins and a Howard Hughes Medical Institute investigator, discovered and cloned the first semaphorin gene in the grasshopper when he was a postdoctoral fellow. Over the past 15 years, numerous animal models, including strains of genetically engineered mice, have been created to study this family of molecules.

Using two lines of mice — one missing semaphorin and another missing neuropilin, its receptor — postdoctoral fellow Tracy Tran used a classic staining method called the Golgi technique to look at the anatomy of nerve cells from mouse brains. (The Golgi technique involves soaking nerve tissue in silver chromate to make cells’ inner structures visible under the light microscope; it allowed neuroanatomists in 1891 to determine that the nervous system is interconnected by discrete cells called neurons.)

Tran saw unusually pronounced “spines” sprouting willy-nilly in peculiar places and in greater numbers on the dendrites in the neurons of semaphorin-lacking and neuropilin-lacking mice compared to the normal wild-type animals. It’s at the tips of these specialized spines that a lot of synapses occur and neuron-to-neuron communication happens, so Tran suspected there might be more synapses and more electrical activity in the neurons of the mutant mice.

The researchers tested this hypothesis by examining even thinner brain slices under an electron microscope.

The spines of both semaphorin-lacking and neuropilin-lacking mice were dramatically enlarged, compared to those of the smaller, spherical-looking spines in the wild-type mice. In wild types, Tran generally noted a single site of connection per spine. In the mutants, the site of connection between two neurons was often split.

Next, the team recorded the electrical output of mutant and wild-type neurons and found that the mutants, with more spines and larger spines, also had about a 2.5-times increase in the frequency of electrical activity, suggesting that this abnormal synaptic transmission is due to an increase in the number of synapses.

What causes synapses to form or not form in appropriate or inappropriate places is an extremely important and poorly understood process in the development of the nervous system, Kolodkin says, explaining that the neurons his team studies can have up to 10,000 synaptic connections with other neurons. If connections between neurons are not being formed how and where they’re supposed to, then miscommunication occurs and circuits malfunction; as a result, any number of diseases or disorders might develop.

“Seizures can be interpreted as an uncontrolled rapid-firing of certain neural circuits,” Kolodkin asserts. “Clearly there’s a deficit in these animals that has a human corollary with respect to epilepsy. It’s also thought that schizophrenia and autism spectrum disorders have developmental origins of one sort or another. There likely are aspects to the formation of synapses — if they’re not in the correct location and in the correct number — that lead to certain types of defects. The spine deficits in these mice that are lacking semaphorin or its receptor appear very similar to those that are found in Fragile X, for instance.”

This work was supported by the National Institutes of Health, National Science Foundation, and the Howard Hughes Medical Institute.