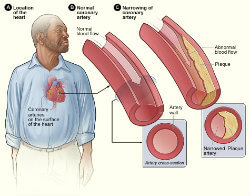 Working with mice and rabbits, Johns Hopkins scientists have found a way to block abnormal cholesterol production, transport and breakdown, successfully preventing the development of atherosclerosis, the main cause of heart attacks and strokes and the number-one cause of death among humans. The condition develops when fat builds inside blood vessels over time and renders them stiff, narrowed and hardened, greatly reducing their ability to feed oxygen-rich blood to the heart muscle and the brain.

In a series of experiments, described April 7 in the journal Circulation, the Johns Hopkins team says it identified and halted the action of a single molecular culprit responsible for a range of biological glitches that affect the body’s ability to properly use, transport and purge itself of cholesterol — the fatty substance that accumulates inside vessels and fuels heart disease.

The offender, the researchers say, is a fat-and-sugar molecule called glycosphingolipid, or GSL, which resides in the membranes of all cells, and is mostly known for regulating cell growth. Results of the experiments, the scientists say, reveal that this very same molecule also regulates the way the body handles cholesterol.

The Johns Hopkins team used an existing man-made compound called D-PDMP to block the synthesis of the GSL molecule, and by doing so, prevented the development of heart disease in mice and rabbits fed a high-fat, cholesterol-laden diet. The findings reveal that D-PDMP appears to work by interfering with a constellation of genetic pathways that regulate fat metabolism on multiple fronts — from the way cells derive and absorb cholesterol from food, to the way cholesterol is transported to tissues and organs and is then broken down by the liver and excreted from the body.

“Current cholesterol-lowering medications tackle the problem on a single front — either by blocking cholesterol synthesis or by preventing the body from absorbing too much of it,” says lead investigator Subroto Chatterjee, Ph.D., a cardio-metabolic expert at the Johns Hopkins Children’s Center.  “But atherosclerosis is a multi-factorial problem that requires hitting the abnormal cholesterol cycle at many points. By inhibiting the synthesis of GSL, we believe we have achieved exactly that.”

Specifically, the experiments showed that treatment with D-PDMP led to:

•a drop in the animals’ levels of so-called bad cholesterol or low-density lipoprotein, LDL;
•a drop in oxidized LDL, a particularly virulent form of fat that forms when LDL encounters free radicals. Oxidized LDL easily sticks to the walls of blood vessels, where it ignites inflammation, damaging the vessel walls and promoting the growth of fatty plaque;
•a surge in good cholesterol or high-density lipoprotein, HDL, known to counteract the effects of LDL by mopping it up; and
•a significant drop in triglycerides, another type of plaque-building fat.

The treatment also prevented fatty plaque and calcium deposits from building up inside the animals’ vessels. These effects were observed in animals on a daily D-PDMP treatment even though they ate a diet made up of 20 percent triglycerides — the human equivalent of eating a greasy burger for breakfast, lunch and dinner. In addition, the researchers say, D-PDMP appears to precision-target the worst byproducts of aberrant cell growth signaling, such as oxidized LDL and the activity of certain chemicals that fuel vessel inflammation, without altering cell growth itself.

D-PDMP, which has been long used in basic research to experimentally block and study cell growth and other basic cell functions, is deemed safe in animals, the investigators say. For example, animals in the current study had no side effects even when given D-PDMP doses 10 times higher than the minimum effective dose, the study found. The research team is currently designing a compound drug with D-PDMP, which they soon plan to test in other animals and, eventually, in humans.

Mice used in the experiments were genetically engineered to lack a protein essential in the breakdown of fats and thus were predisposed to atherosclerosis. The researchers fed the animals a high-fat diet over the course of several months, but also gave a third of the animals a low-dose of D-PDMP. They gave a double dose of the same inhibitor to another third and placebo to the rest.

When scientists measured the thickness of the animals’ aortas — the body’s largest vessel and one that carries blood from the heart to the rest of the body — they found striking differences among the groups. As expected, the aortas of mice that got placebo had grown thicker from the accumulation of fat and calcium deposits inside them. The aortas of mice on low-dose D-PDMP, however, were significantly thinner with little to no obstruction. To the researchers’ surprise, Chatterjee says, mice eating high-fat foods and treated with high-dose D-PDMP had nearly pristine arteries free of obstruction, indistinguishable from those of healthy mice.

Next, the researchers measured how well and how fast blood traveled through the animals’ blood vessels. Slower blood flow signals clogging of the vessel and is a marker of atherosclerosis. The vessels of mice fed a high-fat diet plus D-PDMP had normal blood flow. Mice receiving a high-fat diet without D-PDMP predictably had compromised blood flow.

When researchers examined cells from the animals’ livers — the main site of fat synthesis and breakdown — they noticed marked differences in the expression of several genes that regulate cholesterol metabolism. The activity of these genes is heralded by the levels of enzymes they produce, Chatterjee says. Mice treated with D-PDMP had notably higher levels of two enzymes responsible for maintaining the body’s delicate fat homeostasis by regulating the way cells take in and break down cholesterol. Specifically, the scientists say, the inhibitor appeared to stimulate the action and efficacy of a class of protein pumps in the cell responsible for maintaining healthy cholesterol levels by transporting cholesterol in and out of the bloodstream. In addition, mice treated that way had higher levels of lipoprotein lipase, an enzyme responsible for the breakdown of triglycerides. A deficiency in this enzyme causes dangerous buildup of blood triglycerides.

Treatment with a D-PDMP also boosted the activity of an enzyme responsible for purging the body of fats by converting these fats into bile, the fat-dissolving substance secreted by the liver.

In a final set of experiments, researchers compared the effects of treatment with D-PDMP in two groups of healthy rabbits, both fed high-fat diets, with half of them receiving treatment. Rabbits that ate high-fat food alone developed all the classic signs of atherosclerosis—fatty plaque buildup in the arteries and stiff, narrowed blood vessels. Their cholesterol levels shot up 17-fold. By contrast, rabbits treated with D-PDMP never developed atherosclerosis. Their cholesterol levels also remained normal or near-normal.

The World Health Organizations estimates that high cholesterol claims 2.6 million lives worldwide each year. More than 70 million Americans have high cholesterol, according to the U.S. Centers for Disease Control and Prevention. Current cholesterol-lowering drugs, such as statins, do not work in about one-third of people who take them, experts say.

Alberto Avolio, Ph.D., of the Australian School of Advanced Medicine, contributed to the research.

The work was funded by the National Heart, Lung, and Blood Institute’s Program of Excellence in Glycosciences under grant numbers PO1HL107153 and 3PO1HL107153-03S1.