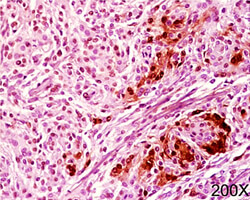 The brown stain shows the presence of the protein NY-ESO-1 in this human meningioma sample. Nuclei are stained in purple.
Gilson Baia

Johns Hopkins researchers say they have found a specific protein in nearly 100 percent of high-grade meningiomas — the most common form of brain tumor — suggesting a new target for therapies for a cancer that does not respond to current chemotherapy.

Importantly, the investigators say, the protein — NY-ESO-1 — is already at the center of a clinical trial underway at the National Cancer Institute. That trial is designed to activate the immune systems of patients with other types of tumors that express the protein, training the body to attack the cancer and eradicate it.

“Typically there is a lag time before a laboratory finding like this leads to a clear path forward to help patients. But in this case, since there is already a clinical trial underway, we have a chance of helping people sooner rather than later,” says Gregory J. Riggins, M.D., Ph.D., a professor of neurosurgery at the Johns Hopkins University School of Medicine and the senior author of the study published online in the journal Cancer Immunology Research.

In the NCI trial, NY-ESO-1 is found in a much smaller percentage of tumors than Riggins and his team found in high-grade meningioma, suggesting that for the brain cancer, the target would be potentially more significant.

Most low-grade meningiomas located in easy-to-reach locations can be treated successfully with surgery and radiation. But more atypical, higher-grade tumors are much more difficult to eradicate and are deadlier.

Riggins and his colleagues, including Gilson S. Baia, Ph.D., and Otavia L. Caballero, M.D., Ph.D., set out to find cancer antigens in meningioma. Cancer antigens are proteins expressed in tumors but not in healthy cells, making them good targets for chemical or immune system attack. They looked specifically at 37 cancer/testis (CT) genes, which are not found in normal cells in the body except in germ cells and cells cordoned off in the testicles or, in some cases, ovaries.

CT genes are activated, however, in various cancers. While they are seen as “foreign” by the body’s immune system, they are often locked behind the sophisticated defense system that cancers use to evade attack by immune cells. Finding a way to get the immune system to see these protein antigens, however, could allow for the body to recognize the invasion and go after the cancer cells. Various approaches are being used to do that, including vaccines and a system involving removing T-cells from the body and reprogramming them before returning them and setting them loose on the cancer cells.

The Johns Hopkins researchers took tissue from 18 different meningioma samples, removed the genetic material and protein and checked at what levels the 37 different genes were turned on. The gene that is the blueprint for the NY-ESO-1 protein was turned on more frequently than any other, in five of the 18 patient samples.

Then they analyzed NY-ESO-1 expression in a larger group of 110 meningioma tissue samples. They found NY-ESO-1 in 108 of them. The more expression in the sample, they also determined, the higher the tumor grade. The higher levels of NY-ESO-1 expressed also correlated with significantly lower disease-free and overall survival rates in the patients they came from.

The NCI trial originally began in melanoma patients. NY-ESO-1 is expressed in roughly one-third of melanomas as well as approximately one-third of breast, prostate, lung, ovarian, thyroid and bladder cancers, as well as sarcomas. Riggins and his team did not find the protein in glioblastoma, the deadliest form of brain cancer.

He calls the fact that the NCI trial could now include meningioma patients a “stroke of luck.”

“If that therapy did not exist, there would be a lot of work that would have to be done to convince people to pursue this,” Riggins says. “Our goal is to get something that works to the patients. This puts us well on our way.”

The research was funded by the Virginia and D. K. Ludwig Fund for Cancer Research, the Ludwig Institute for Cancer Research, Meningioma Mommas, Margaret H. Riggins, Leonard and Phyllis Attman, and the Irving J. Sherman Research Professorship. In addition to her work at Johns Hopkins, Caballero is also a Ludwig associate investigator.