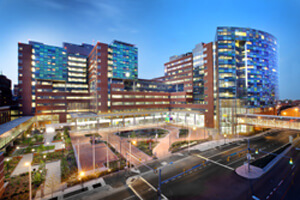 Contrary to previous reports, a study led by Johns Hopkins researchers found that patients’ satisfaction scores only modestly improved based on the newly remodeled design of a hospital.

The data came from Hospital Consumer Assessment of Healthcare Providers and Systems and Press Ganey surveys, both long recognized as industry standards for evaluating hospital performance through patient experience.

Siddiqui and his team analyzed 7.5 months of post-move patient satisfaction survey results and 12 months of pre-move patient satisfaction results. A total of 5,663 patients were surveyed from both the baseline and control groups. The data were categorized into facility-related, nonfacility-related or overall satisfaction-related domains. Data were also adjusted for age, sex, length of stay, insurance type and illness complexity to ensure results were not affected by those variables. Surveys for both the control group and the baseline group were returned at about the same rate pre- and post-move.

“Rate hospital” was the only one of four measures of overall patient satisfaction that improved for patients in the pleasing hospital setting (75 percent versus 83.3 percent); the other two measures of overall satisfaction did not improve significantly, in keeping with physician and nurse scores. “This means that patients are able distinguish the quality of care they get from doctors, nurses, housekeeping and other support services from the look and feel of where they are receiving the care,” says Siddiqui. This is a concept that was not previously believed.

There is a growing trend toward patient-centered design, which includes incorporating features such as well-lit private suites, sound-reduction paneling, appealing art, healing gardens, water features and sleeping accommodations for family members. In fact, an estimated $200 billion is being spent on hospital construction and renovation in the United States, and developers anticipate further expenditures. Some hospital leaders have long believed that improving facilities with patient-centered design will automatically improve overall satisfaction.

“Not so,” says Siddiqui. “Hospital leaders will have to stop blaming poor patient satisfaction scores on aging buildings and units.” As an alternative, Siddiqui and his colleagues propose that priority projects should also include a focus on training providers on personalized care, educating patients and involving families in care decisions.

Although two other similar studies have been done on this topic in the past, they had limitations. In one study, participants were self-selected because they had to pay for the appealing rooms, and the study group was small (177 patients). In the second study, researchers looked at data for a maternity unit, a much different patient population with unique care needs. This study looked at a single academic tertiary care hospital.

The authors suggest that additional research should focus on evaluating satisfaction results from hospitals that have completed patient safety and provider satisfaction initiatives. This includes design features that improve safety, work flow, efficiency, productivity and stress, among other enhancements.

Zishan Siddiqui was supported by the Osler Center for Clinical Excellence Faculty Scholarship Grant. This research was supported by funds from the Johns Hopkins Hospitalist Scholars Program.

We are providing these items with the understanding that they will be used only to help illustrate the story in the corresponding news release. Please use the credit information provided. If there is anything else you need, please email us at JHMedia@jhmi.edu. Thank you.