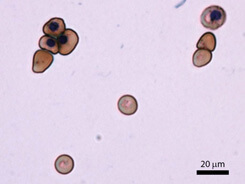 Researchers at Johns Hopkins have successfully corrected a genetic error in stem cells from patients with sickle cell disease, and then used those cells to grow mature red blood cells, they report. The study represents an important step toward more effectively treating certain patients with sickle cell disease who need frequent blood transfusions and currently have few options.

The results appear in an upcoming issue of the journal Stem Cells.

In sickle cell disease, a genetic variant causes patients’ blood cells to take on a crescent, or sickle, shape, rather than the typical round shape. The crescent-shaped cells are sticky and can block blood flow through vessels, often causing great pain and fatigue. Getting a transplant of blood-making bone marrow can potentially cure the disease. But for patients who either cannot tolerate the transplant procedure, or whose transplants fail, the best option may be to receive regular blood transfusions from healthy donors with matched blood types.

The problem, says Linzhao Cheng, Ph.D., the Edythe Harris Lucas and Clara Lucas Lynn Professor of Hematology and a member of the Institute for Cell Engineering, is that over time, patients’ bodies often begin to mount an immune response against the foreign blood. “Their bodies quickly kill off the blood cells, so they have to get transfusions more and more frequently,” he says.

A solution, Cheng and his colleagues thought, could be to grow blood cells in the lab that were matched to each patient’s own genetic material and thus could evade the immune system. His research group had already devised a way to use stem cells to make human blood cells. The problem for patients with sickle cell disease is that lab-grown stem cells with their genetic material would have the sickle cell defect.

To solve that problem, the researchers started with patients’ blood cells and reprogrammed them into so-called induced pluripotent stem cells, which can make any other cell in the body and grow indefinitely in the laboratory. They then used a relatively new genetic editing technique called CRISPR to snip out the sickle cell gene variant and replace it with the healthy version of the gene. The final step was to coax the stem cells to grow into mature blood cells. The edited stem cells generated blood cells just as efficiently as stem cells that hadn’t been subjected to CRISPR, the researchers found.

Cheng notes that to become medically useful, the technique of growing blood cells from stem cells will have to be made even more efficient and scaled up significantly. The lab-grown stem cells would also need to be tested for safety. But, he says, “This study shows it may be possible in the not-too-distant future to provide patients with sickle cell disease with an exciting new treatment option.”

This method of generating custom blood cells may also be applicable for other blood disorders, but its potential does not end there, Cheng says. One possibility, which his group hopes to begin studying soon, is that the blood cells of healthy people could be edited to resist malaria and other infectious agents.

Other authors on the paper are Xiaosong Huang, Ying Wang, Wei Yan, Cory Smith, Zhaohui Ye, Jing Wang and Yongxing Gao, all of The Johns Hopkins University, and Laurel Mendelsohn of the National Heart, Lung and Blood Institute.