Recognized with Inaugural American Board of Medical Specialties Award, and Ranking on List of Modern Healthcare and Modern Physician’s “50 Most Influential Physician Executives in Healthcare”
Release Date: April 25, 2012 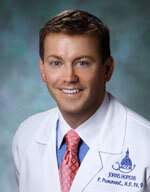 Chosen for his national and international contributions to quality and patient safety, Pronovost is the first recipient of the American Board of Medical Specialties (ABMS) Health Care Quality and Patient Safety Award. ABMS, which oversees certification of physician specialties in the United States, presented Pronovost with the award April 25 at its annual Assembly Meeting in Washington, D.C.

Also this week, Modern Healthcare and Modern Physician magazines for the second time in two years ranked Pronovost as one of their “50 Most Influential Physician Executives in Healthcare” for 2012. He ranked 19th on the list this year, up nine spots from 2011.

“Medical errors are one of the leading causes of death and injury in our country, and many of these are preventable,” says Pronovost, who is the senior vice president for patient safety and quality at Johns Hopkins Medicine, and director of the Johns Hopkins Armstrong Institute for Patient Safety and Quality. “It’s an honor to be recognized for our work and my team and I remain committed to reducing preventable harm among those who trust us with their medical care,” he says.

One of Pronovost’s signature accomplishments was the development of a scientifically proven checklist for reducing deadly bloodstream infections associated with the insertion and use of central lines to deliver drugs and take blood samples from critically ill patients. His effective five-step checklist for physicians and nurses virtually eliminated these infections and has saved more than 1,500 lives and $100 million annually in Michigan hospitals, and the protocol is being implemented at hospitals across the United States and in several countries overseas.

Pronovost has chronicled his patient safety efforts in a 2010 book, Safe Patients, Smart Hospitals: How One Doctor’s Checklist Can Help Us Change Health Care from the Inside Out. He has published more than 400 articles related to patient safety and the measurement and evaluation of safety efforts. He regularly addresses Congressional committees on the importance of patient safety, and a report by the U.S. House of Representatives’ Committee on Oversight and Government Reform strongly endorses his ICU infection prevention program. He is an advisor to the World Health Organizations’ World Alliance for Patient Safety, and speaks internationally on the need for rigorous measurement and evaluation of patient safety efforts.

In 2008, he was awarded a MacArthur Fellowship, or “genius grant,” from the John D. and Catherine T. MacArthur Foundation, given, the foundation says, to those who “exhibit exceptional creativity” and show promise of making future advances based on a track record of significant accomplishment. That same year, Pronovost was named one of Time magazine’s “100 Most Influential People in the World” for his work in advancing patient safety research. He also received the 2004 John Eisenberg Patient Safety Research Award.