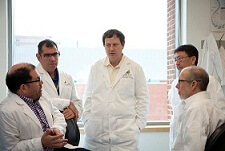 1 2 3
The Ludwig Center at Johns Hopkins team leaders; (left to right, Luis Diaz, Nickolas Papadopolous, Kenneth Kinzler, Shibin Zhou, Bert Vogelstein)
Flynn Larsen
Scientists at the Johns Hopkins Kimmel Cancer Center will receive $90 million in new funding as part of a $540 million gift from Ludwig Cancer Research, on behalf of its founder Daniel K. Ludwig, to six U.S. institutions. The new award is among the largest for a single private gift to cancer research.
Bert Vogelstein, M.D., and Kenneth Kinzler, Ph.D., co-directors of the Ludwig Center at Hopkins, used an initial $20 million Ludwig gift to establish the Center and create the first genomic maps of cancer in 2006. Since then, their team has cracked the genetic codes of more than a dozen different forms of cancer, including breast, colon, brain, pancreas, ovarian and head and neck cancers and has published discoveries of newly linked cancer genes from each map.
“The Ludwig bequests have revolutionized what we’ve been able to do,” says Vogelstein, Ludwig Center co-director, as well as the Clayton Professor in Oncology and a Howard Hughes Medical Institute Investigator at Johns Hopkins. “We’ve pursued some of the most important questions in cancer – not necessarily the most fundable questions.”

With the new gift, Ludwig’s commitment to cancer research at the six U.S.-based institutions now totals approximately $900 million and another $1.6 billion globally. The five other Ludwig Centers to share in the current award are: Harvard University, Massachusetts Institute of Technology, Memorial Sloan-Kettering Cancer Center, Stanford University, and the University of Chicago.
“Our current research programs focus on diagnostics for the early detection and prevention of cancers thanks, in large part, to Ludwig support,” says Kinzler, Ludwig Center co-director and professor of oncology at Johns Hopkins. “Compared with treatment research, early detection and prevention research is underfunded, but it can potentially make more of an impact on reducing cancer deaths.”
“It takes a long time and a sustained effort to see the results of cancer prevention and early detection studies,” adds Kinzler. “Ludwig funding will enable us to carry this and many other research projects forward.”
Kinzler and Vogelstein are consistently ranked as two of the world’s most highly cited cancer scientists by virtue of the number of journal citations their work receives, a common measure of scientific impact. Their work has helped define the genetic bases of human cancer and led to blood tests widely available for diagnosing hereditary forms of colon cancer.
The Ludwig gift will count toward the Johns Hopkins: Rising to the Challenge campaign, an effort across all of Johns Hopkins to raise $4.5 billion by the end of 2017 to foster discovery and scholarship, advance health, identify innovative solutions to global problems, and support faculty and students. As of last month, the campaign had reached half its dollar goal on the strength of gifts or pledges from more than 162,000 donors.

For instructions to download the full-length video and/or b-roll footage of the Ludwig Center at Johns Hopkins, contact Vanessa Wasta: wasta@jhmi.edu

Commemorative issue of Promise and Progress: The Ludwig Center at Johns Hopkins