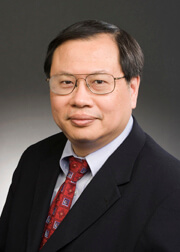 A Johns Hopkins expert in brain imaging, Dean F. Wong, M.D., Ph.D., has been honored with the prestigious 2013 Paul C. Aebersold Award for his contributions over the past 30 years in applying basic science to the field of nuclear medicine.

Wong, a nuclear medicine specialist and professor at the Johns Hopkins University School of Medicine and the university’s Bloomberg School of Public Health and Carey School of Business, was presented with the award by officials from the Society of Nuclear Medicine and Molecular Imaging at the society’s annual meeting this week in Vancouver, Canada. After a brief presentation on Wong’s life and career, society representatives presented him with a commemorative plaque. The award is named after the American who pioneered use of radioactive materials in medicine during the 1950s and 1960s.

In a statement, the society praised Wong, who is also vice chair for radiology research administration and training at Johns Hopkins, and director of high-resolution brain PET imaging, for having produced “prolific amounts of research on the design, development, quantification and application of radiopharmaceuticals imaged with positron emission tomography (PET) and single photon emission computed tomography (SPECT) for the study of in-vivo brain chemistry.”

The society noted Wong’s accomplishments, which include his oversight and involvement in the first dopamine PET receptor imaging in human beings; his leadership of the first study suggesting elevations of so-called D2 dopamine receptors in schizophrenia, and how dopamine is transported in and out of cells; his leadership as principal investigator on one of the first studies to document cocaine craving, as measured by nerve cell dopamine release; as well as his research team’s demonstration of elevated dopamine release in Tourette’s syndrome.

More recently, the society noted, Wong’s lab collaborated with Avid Radiopharmaceuticals of Philadelphia on the first study using FDA-approved F-18 amyloid radiopharmaceutical imaging in humans to help map out the role of amyloid plaques in large groups of patients suffering from Alzheimer’s.

“This is a great honor for Dean, whose work continues to have lasting impact on nuclear medicine and radiology,” says Jonathan Lewin, M.D., the Martin Donner Professor and director of the Russell H. Morgan Department of Radiology and Radiological Science at Johns Hopkins, and the radiologist-in-chief at The Johns Hopkins Hospital. “Dean is one of the most dedicated scientists with whom I have worked, and it is a true pleasure to see his commitment to scientific discovery recognized in such a meaningful way through this award.”

“He pioneered the use of PET scanning to identify, in human subjects, receptors for the major neurotransmitters.”

Snyder adds, “In the course of this work, Dean elucidated actions of the major psychotropic drugs, a giant step forward in demonstrating through nuclear imaging how these drugs bind to receptors in the brain.”

Wong has conducted all of his research at Johns Hopkins since 1980, and earned his Ph.D. here in 1990 in radiation health sciences. In addition to his many academic appointments here, he also has an appointment at the University of Copenhagen in Denmark, and is a member of the Center for Scientific Review’s study section on the Neural Basis of Psychopathology, Addictions and Sleep Disorders, at the National Institutes of Health. Wong completed his medical degree at the University of Toronto in 1977. Born in Buffalo, N.Y., he resides in Lutherville, Md.

For more information, go to: