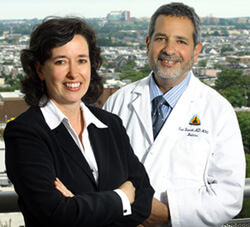 Jeanne M. Clark, M.D., M.P.H., is the inaugural recipient of the Frederick Brancati M.D. Endowed Professorship in Medicine at the Johns Hopkins University School of Medicine.

Brancati is the director of Hopkins’ Division of General Internal Medicine and was himself recently named Distinguished Service Professor of Medicine by the Johns Hopkins University Board of Trustees.

“I am delighted and proud that Dr. Jeanne Clark will be the first occupant of the Brancati chair,” says Brancati, an internationally recognized expert on the epidemiology and prevention of type 2 diabetes and related conditions. “She’s got exactly the right skill set for strong academic leadership — scientific creativity, clinical excellence, love of mentoring, unwavering devotion to the mission, and the passion, integrity and resolve to confront obstacles and surmount them.”

Clark, associate director of the Division of General Internal Medicine, was chosen for that post by Brancati, who calls her his “heir apparent.” A Johns Hopkins University graduate, Clark also holds joint appointments in the Division of Gastroenterology and Hepatology and in the Department of Epidemiology at the Johns Hopkins Bloomberg School of Public Health. She is a core faculty member of the Welch Center for Prevention, Epidemiology and Clinical Research and a practicing physician.

“It is an honor for anyone to receive a chair at Johns Hopkins, where there are so many deserving faculty members,” Clark says. “But to be the inaugural recipient of this chair, named after my mentor, Dr. Frederick Brancati, is especially meaningful. He is a brilliant and accomplished scientist, a visionary leader, a mentor’s mentor and a beloved physician and teacher who has touched the lives of many people across the institution and beyond. To be installed in a professorship in his name is truly humbling.”

She earned her medical degree from the University of Medicine and Dentistry of New Jersey –Robert Wood Johnson Medical School (UMDNJ-RWJMS) and completed internship and residency training in internal medicine at Dartmouth-Hitchcock Medical Center in New Hampshire, where Clark also served as chief medical resident. Brancati then recruited her to Johns Hopkins, where she completed a general internal medicine clinical research fellowship and has been ever since.

Clark has devoted her career to studying the epidemiology and treatment of obesity and its consequences, especially type 2 diabetes and nonalcoholic fatty liver disease. She is currently principal investigator of a trial at Johns Hopkins to determine the comparative effectiveness and mechanisms of diabetes improvement following weight loss achieved by three methods: lifestyle change, gastric banding surgery and gastric bypass surgery. She developed and continues to run a seminar for medical residents on weight management and won the Johns Hopkins Department of Medicine David M. Levine Excellence in Mentoring Award in 2009.

Brancati says he is “deeply honored” to see a professorship named after him.

“I don’t know what my grandparents imagined for their kids and grandkids when they crowded onto boats in the old country and came to America, but I’m pretty sure they never imagined this,” he says. “It’s been an incredible ride for me at Hopkins since I came as a fellow in 1989.  I tell potential recruits that Hopkins is different from other medical centers — that it’s about the love of the mission and the spirit of camaraderie. The professorship represents that love and spirit to me and my family.”