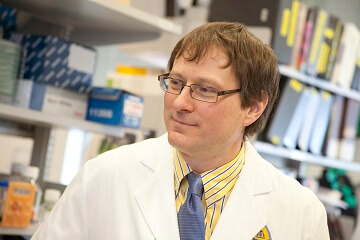 Cancer “gene hunter” Kenneth W. Kinzler, Ph.D., co-director of the Ludwig Center at the Johns Hopkins Kimmel Cancer Center, is one of 80 new members elected to the National Academy of Medicine. Members of the academy advise the U.S. government on medical and health issues. They are elected by their peers for their accomplishments and contributions to medical sciences, health care and public health.
“Ken led the world to understand that cancer is a disease of genetic defects and has systematically revealed what those defects are,” says William Nelson, M.D., Ph.D., the Marion I. Knott Professor and Director of Oncology. “His current focus on early detection holds great promise to intervene in the fate of cancer cells before they can cause harm.”
“Ken is an out-and-out genius, with intuitions and talents that continue to amaze me, even after working so closely with him for two decades,” says Bert Vogelstein, M.D., the Clayton Professor of Oncology, co-director of the Ludwig Center with Kinzler, a Howard Hughes Medical Institute investigator and a National Academy of Sciences member.
Kinzler has been recognized for his role in uncovering the genetic alterations linked to the initiation of colon cancer, one of the most common cancers worldwide; development of novel approaches for the molecular analysis of cancer; and more recently, for his role in deciphering the genetic blueprints of many types of cancer.
In the early 1990s, he led scientists in the identification and analysis of the APC gene, the most frequently mutated tumor suppressor gene in colon cancer. In the mid-1990s, he invented SAGE (Serial Analysis of Gene Expression), allowing the first comprehensive analysis of gene expression in human cancer and leading Kinzler to coin the term “transcriptome,” referring to genes that are transcribed at a particular point in time. In the late 1990s and early 2000s, he invented digital PCR and other digital genomics approaches for the detection of trace levels of tumor DNA. In the late 2000s, Kinzler and Vogelstein led a team of scientists who decoded the genomes of many cancers, including breast, colon, pancreatic, brain, ovarian and liver.
Ludwig Center scientists led by Kinzler and Vogelstein currently are focused on developing better methods for detecting cancer early, when it is most curable. Their efforts have led to discoveries in detecting DNA shed from tumors in blood and other body fluids, which were made possible by the digital genomic approaches using the techniques he previously discovered.
Kinzler, who is the associate director for laboratory research at the Kimmel Cancer Center, is consistently ranked among the most highly cited scientists in clinical medicine, according to industry analysts at Thomson Reuters. He has received the Philadelphia College of Pharmacy and Science Alumni Award, the Johns Hopkins University School of Medicine Sandoz Award for Superior Academic Achievement and Contribution to Health Care, the David Israel Macht Research Award, the National Cancer Institute’s Director’s Service Award, the inaugural National Brain Tumor Society Founders Award, the 2013 American Association for Cancer Research (AACR) Team Science Award for Pancreatic Cancer Research and the  2014 AACR Team Science Award for Brain Cancer Research. He was elected a fellow of the AACR Academy in 2014.