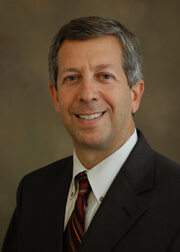 Andrew J. Satin, M.D., has been selected as the new director and Dorothy Edwards Professor of the Department of Gynecology and Obstetrics at the Johns Hopkins University School of Medicine and The Johns Hopkins Hospital. He will officially take on his new role Sept. 1, 2013.

Satin’s research interests include exercise in pregnancy, an interest that he says grew out of his work with women in the military and athletes who wanted to stay physically fit during their pregnancies, and on ways to reduce the rate of preterm births while improving the health outcomes of pregnant women and newborns. He has served since 2007 as both deputy director of the Gyn/Ob department at the Johns Hopkins University School of Medicine and The Johns Hopkins Hospital, as well as director of the Department of Obstetrics and Gynecology and chair of the medical board at Johns Hopkins Bayview Medical Center.

In 2008, Satin received the school of medicine’s John G. Griffith Award for innovation and excellence in education in gynecology and obstetrics, and in 2012, the Gyn/Ob department awarded him a Resident Teaching Award. Recently, he was asked to chair the Johns Hopkins Women’s Health in the National Capital Region Strategic Planning Group, where he has grown relationships with private physicians at Suburban and Sibley Memorial Hospitals and advanced Johns Hopkins programs in the Washington, D.C. area.

“Dr. Satin is a much-admired member of the Johns Hopkins family who has earned the respect of his colleagues and students alike,” says Paul B. Rothman, M.D., dean of the medical faculty and CEO of Johns Hopkins Medicine.
A retired U.S. Air Force colonel and the recipient of numerous military service and achievement medals, Dr. Satin earned his medical degree at the F. Edward Hébert School of Medicine at the Uniformed Services University of the Health Sciences in Bethesda and completed a fellowship in maternal-fetal medicine at the University of Texas Southwestern Medical Center in Dallas.

He holds several national leadership positions, including director of the American Board of Obstetrics and Gynecology and member of the board of the directors of the Society for Maternal-Fetal Medicine. He has served as chair of the American College of Obstetricians and Gynecologists Committees on Practice Bulletins and Clinical Document Review. He has published many articles in obstetrics and maternal-fetal medicine journals and written numerous textbook chapters. Satin, who also conducts extensive research in labor stimulation, has led countless residents through simulation laboratories and directed simulation courses for the American College of Obstetricians and Gynecologists and the Society for Maternal-Fetal Medicine.

Satin succeeds Harold Fox, M.D., director of the Gyn/Ob department for the past 16 years. Fox will remain an active member of the faculty and will continue to pursue his academic interests in Gyn/Ob.

Should You Exercise When You’re Expecting?