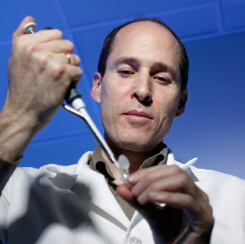 The Arthur Kornberg and Paul Berg Lifetime Achievement Award in Biomedical Sciences was established in 2010 to acknowledge and celebrate the lifetime career achievements of Stanford University School of Medicine alumni in the biomedical sciences. Nathans is one of two winners this year, along with the University of California, San Francisco’s Louis Reichardt, Ph.D.

Nathans is responsible for landmark discoveries that have changed our understanding of how humans see the world — literally. His investigations into the mechanisms that allow us to see colors led him to identify the genes that code for color-vision receptors in the light-sensing cones of the retina. This breakthrough finding allowed him to show that variations in these genes cause color blindness. His work has also led to new understandings of the development, function and survival of the retina.

Nathans’ studies have revealed several defects that lead to human retinal diseases, including Stargardt disease, the most common type of macular degeneration in children and young adults. He also helped to determine the cause of the vitelliform type of macular dystrophy, showing that it is caused by abnormalities in a member of a previously unknown family of ion channels, proteins that allow ions to enter and exit cells.

As a graduate student at Stanford, Nathans became interested in the study of the eye and the mechanisms of vision. He was the first scientist to apply molecular genetic approaches to the visual system, and over the past 30 years, his research has illuminated a broad landscape in human genetics, ophthalmology, neurobiology, developmental biology and evolution. Research on the retina, which he describes as a “mini-brain that processes an image in a number of ways,” may provide answers about how the human brain is built, he contends, revealing how embryonic cells make the right connections and are programmed to eventually become mature cells.

On the web:
HHMI biography of Jeremy Nathans