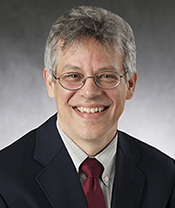 James Potash, M.D., M.P.H., will rejoin Johns Hopkins Medicine on July 1 as the Henry Phipps Professor and director of the Department of Psychiatry and Behavioral Sciences. In this position, Potash will continue to advance the department’s longstanding tradition of excellence in providing psychiatric services for the community, clinical and basic research, and programs to enhance the training of students.

Potash comes to Johns Hopkins Medicine from the University of Iowa Carver College of Medicine, where he currently serves as the Paul W. Penningroth Chair, professor and head of the Department of Psychiatry.

Potash spent the early part of his career at Johns Hopkins. He completed an internship in internal medicine at Johns Hopkins Bayview Medical Center in 1994 and then became an assistant resident and later chief resident in psychiatry at The Johns Hopkins Hospital. He joined the faculty of the Department of Psychiatry in 1998 and advanced to become director of the Mood Disorders Center and psychiatric emergency services.

Potash is known for his research on the genetic basis of mood disorders, in particular the identification of genetic determinants of susceptibility to depression and bipolar disorder. He has authored more than 100 publications and collaborated on the revision of a leading textbook in the field, Manic-Depressive Illness.

The significance of his research has been recognized with the Robins/Guze Award for research excellence from the American Psychopathological Association, and the NARSAD Independent Investigator Award.

Potash earned his bachelor’s degree from Yale College in 1984 and then served as a volunteer in the United States Peace Corps in Senegal. It was during his time with the Peace Corps that he was inspired by the medical needs of people in that country and decided to pursue a career in medicine. He earned a post-baccalaureate degree in pre-med from Goucher College in 1988, a master’s degree in public health from the then-named Johns Hopkins School of Hygiene and Public Health in 1989, and a medical degree from the Johns Hopkins University School of Medicine in 1993.