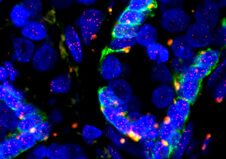 Like the plastic caps at the end of shoelaces, telomeres protect -- in their case -- the interior-gene containing parts of chromosomes that carry a cell's instructional material. Cancer cells are known to have short telomeres, but just how short they are from cancer cell to cancer cell may be a determining factor in a prostate cancer patient's prognosis, according to a study led by Johns Hopkins scientists.

"Doctors are looking for new ways to accurately predict prostate cancer patients' prognoses, because the current methods that use disease stage, Gleason score, and PSA are not perfect," says Alan Meeker, Ph.D., assistant professor of pathology at the Johns Hopkins University School of Medicine and its Kimmel Cancer Center. "Telomere shortening is common in cancer, but the degree of shortening varies from one cancer cell to another within each patient, and this variability may give us a better idea of how prostate cancers behave."

In the study, described in the October issue of Cancer Discovery, the scientists studied tissue samples from 596 men surgically treated for prostate cancer thought to be confined to the prostate and who were participants in a long-term follow-up study on men's health. Then, they used images of prostate cancer cells and nearby cells called stroma, which include smooth muscle and fibroblast cells, taken from surgery-tissue samples of each patient.

Meeker and his team used a technique they developed called telomere-specific fluorescent in situ hybridization (TELI-FISH) to measure telomere length in cancer and stromal cells. The technique uses fluorescent-labeled probes specific for particular locations in DNA, and is commonly used to detect or confirm gene or chromosome abnormalities. In the new study, a fluorescent probe specific for telomere regions was added to the cells, enabling the scientists to identify these specific chromosomal locations under a microscope and measure the level of fluorescence that corresponds to telomere length.

After determining telomere length for more than 40,000 cells among the samples, disease-pattern experts at Johns Hopkins then correlated telomere length measurements in the cancer and stromal cells with each patient's survival.

"Men who had a combination of more variable telomere length among cancer cells and shorter telomere length in stromal cells were more likely to develop metastatic disease and die sooner from their prostate cancer than other men," says Elizabeth Platz, Sc.D., M.P.H., professor of epidemiology at the Johns Hopkins Bloomberg School of Public Health and the Martin D. Abeloff Scholar in Cancer Prevention at the Johns Hopkins Kimmel Cancer Center.

In the group of 98 men with more variable telomere length in cancer cells and shorter telomeres in stromal cells, 20 died of their prostate cancer an average of 8.4 years after diagnosis. Accounting for standard prognostic factors, these men were 14 times more likely to die of their prostate cancer compared with another group of 98 men whose telomeres had less variable length among cancer cells and were longer in stromal cells. In this group, only one man died, and that was after 16.5 years.

"Our studies strongly suggest that the combination of telomere length in stromal cells and its variability among prostate cancer cells could be a marker for prostate cancer prognosis," says Platz.

Meeker and Platz are continuing to study additional groups of patients and are now using an automated fluorescence microscope and computer software to speed the collection of tissue images and extract telomere data.

Funding for the study was provided by the Department of Defense, the National Institutes of Health's National Cancer Institute (CA58236, CA55075, CA72036, CA133891, CA141298) and National Heart, Lung, and Blood Institute (HL35464), the Seraph Foundation, and the Prostate Cancer Foundation.