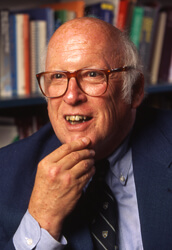 Paul S. Lietman, M.D., Ph.D., a specialist in bacterial and viral infections who was the longtime chief of the Division of Clinical Pharmacology at the Johns Hopkins School of Medicine and an influential teacher and mentor  to generations of Hopkins medical students and scientists, died at his Baltimore home on April 20 of congestive heart failure. He was 79.

Lietman headed the Division of Clinical Pharmacology, which is part of both the Department of Medicine and the Department of Pharmacology and Molecular Science, from 1972 to 2001. Holding appointments also in the departments of medicine and pediatrics, Lietman earned the unusual distinction of having students in both the basic sciences and clinical fields give him faculty awards for teaching. He held the Wellcome Professorship of Clinical Pharmacology from 1980 to 1998 and was instrumental in the creation of a number of innovative research groups and initiatives.

“Complementing this, he took a great interest in people. He was a major force in the field of clinical pharmacology and in the academic life of Johns Hopkins,” Shapiro said.

“He directed the pharmacy review committee for decades, and applied strict, evidence-based assessment of whether drugs should be added to the formulary,” Dover said. “In his later years, he was a leader in the development of Hopkins’ international activities and most recently was a force in many of our Chinese collaborations.”

When Hopkins launched its Johns Hopkins Singapore research and medical care operation in 1998, Lietman was named the founding director of research and education there. From scratch, he created eight basic research laboratories and five other projects.  The academic clinical research organization, however, did not succeed because of “internal conflicts in Singapore,” he later said, and was discontinued in 2006. Other aspects of Johns Hopkins Singapore, including the medical clinic operated there by Johns Hopkins Medicine International, are thriving.

As director of academic relations for Johns Hopkins Medicine International, he led the successful effort to resurrect the historic academic relationship between Hopkins and the medical faculty of the American University of Beirut in Lebanon. He also led the efforts to establish collaboration between Hopkins and the Children’s Hospital of Fudan University in Shanghai and the University of Trinidad and Tobago in Trinidad.

At The Johns Hopkins Hospital, he founded and managed the Drug Development Unit (DDU) within his division, as well as the Graduate Training Program in Clinical Investigation (GTPCI), a Ph.D.-granting program jointly sponsored by the school of medicine and Hopkins’ Bloomberg School of Public Health.  It was the nation’s first clinical training program to offer a Ph.D. in clinical investigation.

“Paul was a world-renowned clinical pharmacologist who pioneered antiviral treatments, including drugs for patients infected with herpes simplex virus and HIV,” said Petty. “He demanded excellence in the studies he and others performed. Such excellence allowed rational decisions about the use of medications in complex cases.”

Born in Chicago, Lietman grew up in Clarinda, Iowa, and Cuyahoga Falls, Ohio, where his father was a Presbyterian minister. He met his future wife, the former Sharon Coffield, in the eighth grade. They married in 1956.

Lietman obtained his undergraduate degree from what is now is Case Western Reserve University in Cleveland, Ohio; his medical degree from Columbia University; and his Ph.D. from Hopkins. But for brief stints at the Hospital for Sick Children on Great Ormond Street in London, England, and at the National Institutes of Health in Bethesda, he spent most of his 51-year career at Hopkins. He retired in 2010.

In addition to his wife, Lietman is survived by two sons, Thomas Lietman, a professor of ophthalmology at the University of California, San Francisco; Steve Lietman, an orthopedic surgeon at the Cleveland Clinic; and a daughter, Jennifer Lietman Howard, a nurse manager at a private mental health facility in Maryland.

Funeral services will be private, but the family will receive friends on May 18 from 3 to 5 p.m. at the Ruck Funeral Home, 1050 York Road, Towson. In lieu of flowers, the family requests that any donations be made to The Johns Hopkins University School of Medicine.