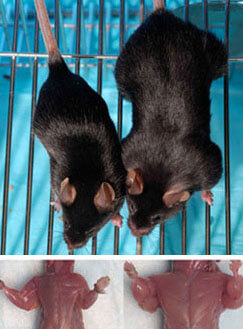 Mice without the gene for myostatin (right) have nearly twice as much muscle mass as normal mice (left).
Se-jin Lee lab

Working with mice, Johns Hopkins researchers have solved a key part of a muscle regeneration mystery plaguing scientists for years, adding strong support to the theory that muscle mass can be built without a complete, fully functional supply of muscle stem cells.

"This is good news for those with muscular dystrophy and other muscle wasting disorders that involve diminished stem cell function," says Se-Jin Lee, M.D., Ph.D., lead author of a report on the research in the August issue of the Proceedings of the National Academy of Sciences and professor of molecular biology and genetics at the Johns Hopkins University School of Medicine.

Muscle stem cells, known as satellite cells, reside next to muscle fibers and are usually dormant in adult mammals, including humans.

After exercise or injury, they are stimulated to divide and fuse, either with themselves or with nearby muscle fibers, to increase or replace muscle mass. In muscle wasting disorders, like muscular dystrophy, muscle degeneration initially activates satellite cells to regenerate lost tissue, but eventually the renewal cycle is exhausted and the balance tips in favor of degeneration, the researchers explain.

Muscle maintenance and growth under healthy, non-injury conditions have been more of a mystery, including the role of myostatin, a protein secreted from muscle cells to stop muscle growth. Blocking myostatin function in normal mice causes them to bulk up by 25 to 50 percent. What is not known is which cells receive and react to the myostatin signal. Current suspects include satellite cells and muscle cells themselves.

Lee notes that, since the results give no evidence that satellite cells are of primary importance to the myostatin pathway, even patients with low muscle mass due to compromised satellite cell function may be able to rebuild some of their muscle tone through drug therapy that blocks myostatin activity.

"Everybody loses muscle mass as they age, and the most popular explanation is that this occurs as a result of satellite cell loss. If you block the myostatin pathway, can you increase muscle mass, mobility and independence for our aging population?" asks Lee. "Our results in mice suggest that, indeed, this strategy may be a way to get around the satellite cell problem."

Authors on the paper include Se-Jin Lee, Thanh Huynh, Yun-Sil Lee and Suzanne Sebald from The Johns Hopkins University, Sarah Wilcox-Adelman of Boston Biomedical Research Institute, Naoki Iwamori and Martin Matzuk of Baylor College of Medicine, and Christoph Lepper and Chen-Ming Fan from the Carnegie Institution for Science.

Disclosure: Under a licensing agreement between Pfizer Inc. and The Johns Hopkins University, Lee is entitled to a share of royalty received by the university on sales of products related to myostatin. The terms of this arrangement are being managed by the university in accordance with its conflict of interest policies.

On the Web:
journal article