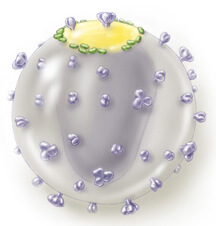 A model of HIV showing the organization of membrane associated cholesterol (in yellow)
Jenny Wang
Researchers at Johns Hopkins have modified HIV in a way that makes it no longer able to suppress the immune system. Their work, they say in a report published online September 19 in the journal Blood, could remove a major hurdle in HIV vaccine development and lead to new treatments.

”Something about the HIV virus turns down the immune response, rather than triggering it, making it a tough target for vaccine development,” says David Graham, Ph.D., assistant professor of molecular and comparative pathobiology and medicine. “We now seem to have a way to sidestep this barrier,” he adds.

Typically, when the body’s immune system cells encounter a virus, they send out an alarm by releasing chemicals called interferons to alert the rest of the body to the presence of a viral infection. When the immune cells encounter HIV, however, they release too many interferons, become overwhelmed and shut down the subsequent virus-fighting response.

The researchers had learned from other studies that when human immune cells (white blood cells) are depleted of cholesterol, HIV can no longer infect them. It turns out the coat that surrounds and protects the HIV viral genome also is rich in cholesterol, leading the Johns Hopkins team to test whether viruses lacking cholesterol could still infect cells at all.

“The altered HIV doesn’t overwhelm the system and instead triggers the innate immune response to kick in, like it does with any first virus encounter,” says Graham.

Next, the researchers checked to see if cholesterol-diminished HIV activates so-called adaptive immune responses—the responses that help the body remember specific pathogens long-term so the body develops immunity and counters future infections. To do this, they put normal HIV or cholesterol-diminished HIV into blood samples, which contain all the different cells needed for an adaptive immune response.

More specifically, they tested blood samples from people with previous exposure to HIV in order to see if their blood could mount an adaptive immune response. Blood samples were used from 10 HIV positive people and from 10 people repeatedly exposed to HIV who weren’t infected. The researchers didn’t expect the HIV-positive blood to respond to either version of HIV because of the severely damaged immune systems of HIV patients. However, when cholesterol-diminished HIV was introduced to the non-infected HIV blood in a tube, the cells of the adaptive immune response reacted against the virus. By altering the virus, explains Graham, the researchers were able to reawaken the immune system’s response against HIV and negate HIV’s immunosuppressive properties.

“In addition to vaccine applications, this study opens the door to developing drugs that attack the HIV viral coat as an adjunct therapy to promote immune system detection of the virus,” says Graham.

This research was supported by funds from the Wellcome Trust and the National Institutes of Health.

Killing HIV by Luring It out of Hiding

Robert and Janet Siliciano, both of Medicine,on the prospects of a cure for HIV infection