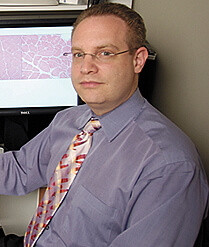 1 2
Ronald Cohn
Photo by Will Kirk

Two Johns Hopkins researchers — a physician whose squirrel hibernation studies may lead to new treatments for muscle-wasting diseases, and an engineer who is building medical tools smaller than a speck of dust — have received prestigious 2008 New Innovator Awards, the National Institutes of Health announced today.

The NIH grants, each covering $1.5 million in direct research costs over five years, were awarded to Ronald Cohn, assistant professor of pediatrics and neurology, McKusick- Nathans Institute of Genetic Medicine, in the Johns Hopkins University School of Medicine; and David Gracias, assistant professor of chemical and biomolecular engineering in the university's Whiting School of Engineering.

Following a rigorous review process, the two Johns Hopkins faculty members were among 31 scientists from universities and institutes throughout the United States selected to receive this year's New Innovator grants, designed to support novel research projects.

"Nothing is more important to me than stimulating and sustaining deep innovation, especially for early career investigators and despite challenging budgetary times," NIH Director Elias A. Zerhouni said in announcing the recipients. "These highly creative researchers are tackling important scientific challenges with bold ideas and inventive technologies that promise to break through barriers and radically shift our understanding."

Kristina M. Johnson, provost and senior vice president for academic affairs at The Johns Hopkins University, added, "There is keen competition for major awards such as these. We are extremely pleased that the NIH has recognized the fine research being conducted by Ronald Cohn and David Gracias. This financial support will help move them closer to their goals of producing important new medical treatments and tools."

Cohn, who studies muscle-wasting diseases including muscular dystrophy, will focus on investigating the molecular mechanisms of preserving muscle mass and function in hibernating ground squirrels.

"I have been interested in muscle biology for many years, but the fascinating phenomenon of hibernation enables us to approach maintenance of muscle mass in a completely new way," says Cohn, whose goal is to characterize the biological pathways crucial for the function of so- called satellite cells muscle cells that repair muscle damaged by trauma or genetic disorders. "The animals I'm going to study don't move for months during hibernation, and don't even breathe more than four times a minute. How do they jump up and run around after they wake up, having maintained their muscle?"

Cohn plans to examine how satellite cells behave during hibernation and prolonged disuse. In particular, he hopes to determine whether satellite cells display an increased tendency to replenish and maintain the satellite cell pool during the period of hibernation. Understanding satellite cell behavior in the hibernating animal may lead to a better understanding of how to treat and possibly stop muscle wasting in acquired conditions such as aging and disuse, as well as in a variety of inherited muscle disorders.

Cohn joined the Johns Hopkins faculty in 2006 after completing a combined pediatrics/genetic medicine residency here. He recently launched the Johns Hopkins Center for Hypotonia, which identifies, supports and treats patients with various conditions associated with low muscle tone. As a clinician and researcher, Cohn has been the recipient of numerous awards, most notably the David M. Kamsler Award for outstanding, compassionate and expert care of pediatric patients, the Helen B. Taussig Award for young Johns Hopkins investigators and the inaugural annual Harvard-Partners Center for Genetics and Genomics Award.

Regarding Cohn's latest recognition, David Valle, director of the Institute of Genetic Medicine, said, "We are thrilled that Ronni was selected as a recipient of a New Innovator Award. This support will enable him to apply his considerable creativity and medical know-how to innovative basic research that will increase our understanding of muscle biology and eventually may lead to important clinical applications for treating muscle diseases."

David Gracias will use his New Innovator award to continue to develop minimally invasive microscale and nanoscale tools and devices for medicine. Microscale tools are designed to perform procedures such as biopsies or to deliver medication at the cellular level; nanoscale tools operate in the realm of proteins and viruses.

A key advantage of the tiny containers and grippers already developed in Gracias' lab is that they can release drugs and grasp tissue without requiring batteries or a wire connected to an outside power source. Instead, Gracias' miniaturized tools are moved from afar by magnets and are activated by chemicals or temperature changes.

"Tomorrow's medical devices will be smart," Gracias says. "We want to get rid of the wires and build an entire mobile, miniaturized surgical toolbox, including devices that can access diseased areas that are difficult to reach with the currently available, tethered, minimally invasive tools."

Gracias has already demonstrated that his prototypes work in lab experiments, and animal testing is under way. With the New Innovators grant, he hopes to advance this research and move closer to the day when physicians will be able to use his tiny tools on patients. "We have some ambitious goals, and there is a lot of work to be done," Gracias says. "But if we succeed, the payoff could be enormous. It could give doctors important new tools to help them diagnose and treat medical problems."

Gracias was raised in Mumbai, India, and earned his undergraduate and master's degrees in chemistry at the Indian Institute of Technology at Kharagpur. He received his doctorate in physical chemistry at the University of California, Berkeley, and was a post-doctoral fellow at Harvard University before joining the Johns Hopkins faculty in 2003. He is affiliated with the Institute for NanoBioTechnology at Johns Hopkins.

Regarding Gracias' New Innovator Award, Nick Jones, dean of the Whiting School of Engineering, said, "We're thrilled that David has received this well-deserved recognition. The award acknowledges more than his pioneering work in micro-to-nanoscale tools and devices for medicine. It is also a confirmation of his role as an exceptionally innovative engineer and recognition of the tremendous potential his research holds."

The New Innovator Award program was launched by NIH in 2007 to support a small group of new investigators who propose bold new approaches that have the potential to produce a major impact on a broad area of biomedical or behavioral research. The program currently supports 61 investigators 30 selected last year and 31 more this year.