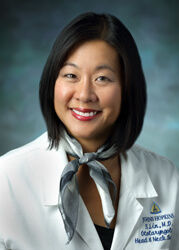 Sublingual immunotherapy is one of several state-of-the-science treatments for allergic rhinitis, or “hay fever,” being recommended by a panel of experts in a new guideline published Feb. 2, 2015, by the American Academy of Otolaryngology—Head and Neck Surgery Foundation.

Allergic rhinitis is the fifth most common disease in the U.S., which costs the economy between $2 billion to $5 billion per year in doctor visits, drugs and other health care expenditures. About one in five Americans suffers from nasal allergies, says Sandra Y. Lin, M.D., the panel’s leading expert on the disease and an associate professor of otolaryngology–head and neck surgery at the Johns Hopkins University School of Medicine.

“When you inhale something you’re allergic to, the inside lining of your nose becomes inflamed, resulting in congestion, runny nose, sneezing or itching,” says Lin, the spokesperson and assistant co-chair of the panel. Some common triggers are plant pollen, dust mites and pet dander.

Because the disease is so common, doctors in a wide range of fields are called on to treat it, and they have a host of options, from over-the-counter remedies to in-office treatments. The academy’s guideline was developed by 21 experts, including ear, nose and throat specialists; allergy specialists; pediatricians; family practitioners; acupuncturists; and patient advocates, to help clinicians sort through these options and find scientifically grounded approaches for each patient. “It is useful for all physicians who treat allergic rhinitis, as well as for patients,” says Lin.

The newest recommended treatment is sublingual immunotherapy, approved by the Food and Drug Administration in April 2014. Immunotherapy gradually desensitizes patients to the allergens that trigger their symptoms. It used to require visits to a doctor’s office for injections, but in sublingual immunotherapy, patients can take tablets or drops at home. The guideline recommends immunotherapy for patients who test positive for a specific allergen and don’t respond well to other treatments. It can take up to five years to complete the treatment, and patients have had allergic reactions in rare cases.

“Immunotherapy is the only treatment that changes the allergic patient’s response to the allergens, and it has the potential to change the natural history of the disease,” says Lin. “This is the first guideline to discuss this form of treatment since the FDA approved sublingual immunotherapy tablets.”

Among the guideline’s other key recommendations:

The panel was chaired by Michael D. Seidman, M.D., of Henry Ford Hospital. Assistant co-chairs were Richard K. Gurgel, M.D., an assistant professor of surgery at the University of Utah, and Lin. The full list of panel members is available, along with the guideline, at http://www.entnet.org/AllergicRhinitisCPG. The American Academy of Otolaryngology—Head and Neck Surgery Foundation funded the guidelines’ development.