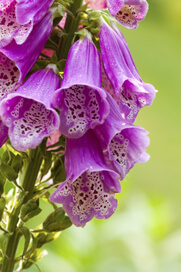 Digoxin is made from the foxglove plant.

Johns Hopkins scientists and their colleagues paired laboratory and epidemiologic data to find that men using the cardiac drug, digoxin, had a 24 percent lower risk for prostate cancer.  The scientists say further research about the discovery may lead to use of the drug, or new ones that work the same way, to treat the cancer.

Digoxin, made from the foxglove plant, has been used for centuries in folk medicine and for decades to treat congestive heart failure and heart rhythm abnormalities.  It also emerged as a leading candidate among 3,000 drugs screened by the Johns Hopkins team for the drugs’ ability to curb prostate cancer cell growth, according to the investigators, who published their findings in the April 3 issue of Cancer Discovery, the newest journal of the American Association for Cancer Research, which is debuting at the AACR 102nd Annual Meeting 2011.

Additional research, by the team, in a cohort of more than 47,000 men revealed that those who took digoxin for heart disease had a significantly lower risk of prostate cancer.  The scientists cautioned, however, that their work does not prove digoxin prevents prostate cancer nor are they suggesting the drug be used to prevent the disease.  “This is not a drug you’d give to healthy people,” says Elizabeth Platz, Sc.D., M.P.H., professor of epidemiology, oncology, and urology at the Johns Hopkins Bloomberg School of Public Health.  Serious side effects include male breast enlargement and heart rhythm irregularities, and the drug commonly causes nausea, vomiting and headache.

In the first stage of research, Johns Hopkins assistant professor Srinivasan Yegnasubramanian, M.D., Ph.D, Kimmel Cancer Center director and professor William G. Nelson, M.D., Ph.D., and professor Jun Liu, Ph.D., identified 38 compounds already FDA-approved or with a history of medical use out of a database of more than 3,000.  The 38 candidate drugs reduced prostate cancer cell growth in the laboratory by at least 50 percent.  They did not include known chemotherapy drugs among the 38.

Nelson and Yegnasubramanian then took the list of 38 drugs to Platz, a prostate cancer research collaborator.  “They literally burst into my office and asked, ‘Can you look at this list of drug candidates and see if you can study any of them in an epidemiologic cohort?’” recalls Platz.

“We realized that combining our laboratory and epidemiologic approaches could reduce the possibility that results on the candidate drugs might be due to chance,” says Platz.  “Adding the epidemiology study to the drug screen step provided an assessment of the drug’s potential activity in people.”

The top hit on the list of anti-prostate cancer drugs, disulfiram, is used to treat chronic alcoholism, but because it is rarely used among the general population, it could not be evaluated effectively in the epidemiologic study.  The second candidate was digoxin, they report, which was prescribed often enough to be studied.

To see if they could identify a link between digoxin and prostate cancer in humans, they turned to a cohort of about 47,000 men aged 40-75 who participated in Harvard’s Health Professionals Follow-up Study from 1986 through 2006 and did not have a cancer diagnosis before 1986.  Study participants had completed a questionnaire every two years, reporting on demographic information, medical history, medication use and lifestyle factors.  For men who reported a prostate cancer diagnosis, researchers evaluated their medical records and pathology reports.

Even after ruling out such potentially “confounding factors” as PSA screening, family history of prostate cancer, and use of other heart drugs, the lower risk of prostate cancer among digoxin users held up, the researchers say.

Platz and Yegnasubramanian say that the next steps will be to determine the mechanism of digoxin’s effect on prostate cancer cells, which will support testing digoxin or other drugs that work in the same way in clinical trials as a potential prostate cancer therapy.  Digoxin alters enzymatic pathways for sodium and potassium in heart cells, and according to the researchers, may also have an effect on the same or different pathways in prostate cancer.

Funding for the research was provided by the National Cancer Institute, National Institutes of Health, the Patrick C. Walsh Prostate Cancer Research Fund at Johns Hopkins, and the National Heart, Lung, and Blood Institute.