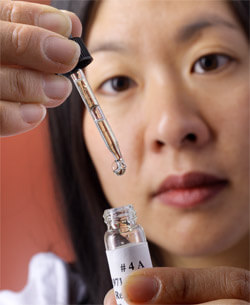 A scientific review of 63 published studies affirms that putting small amounts of purified grasses, ragweed, dust mites, pollen and mold, in liquid drops under the tongue is a safe and effective alternative to weekly injections of those allergens or the use of other medications, in treating symptoms of allergies and allergic asthma in some people.

Results of the review, conducted by researchers at Johns Hopkins, are contained in a report to be published in the Journal of the American Medical Association online March 27. The report is believed to be the largest synopsis of its kind, reviewing previous research comparing various therapies designed to stop the wheezing, sneezing and runny nose that accompany allergic rhinoconjunctivitis and allergic asthma, researchers say.

Specifically, the Johns Hopkins team analyzed 63 studies, involving some 5,131 participants, almost all in Europe, where allergy drops, or so-called sublingual immunotherapy, have been widely available for nearly two decades. Sublingual therapies have not been approved for use by the U.S. Food and Drug Administration, but physicians in the United States do use the drops "off-label" for some patients.

In eight of 13 studies evaluated, researchers found what they say is "strong evidence" that drop therapy produced a 40 percent or greater reduction in coughing, wheezing, and tightness in the chest compared with other treatments, including inhaled steroids.

In nine of 36 studies comparing allergy drops to other allergy treatments, including antihistamines and nasal steroid sprays, researchers found that allergy drops produced a 40 percent or greater reduction in symptoms of runny nose, sneezing and nasal congestion, results which they describe as "moderate evidence" in support of using sublingual immunotherapy.

"Our findings are clear evidence that sublingual immunotherapy in the form of allergy drops are an effective potential treatment option for millions of Americans suffering from allergic asthma and allergic rhinoconjunctivitis," says senior study investigator Sandra Lin, M.D.

According to Lin, an associate professor of otolaryngology-head and neck surgery at the Johns Hopkins University School of Medicine, allergy drops are more convenient for many people because they can be taken at home, and allow such individuals to avoid the discomfort and travel time needed for regularly scheduled trips to the physician's office for an allergy shot. Lin says that, according to current estimates, as many as 40 percent of Americans suffer from some form of allergic rhinitis or allergic asthma.

Lin cautions that drop therapies may not be for all sufferers of allergic rhinoconjunctivitis and allergic asthma, but that many will want to weigh the risks and benefits of sublingual immunotherapy before deciding on long-term treatment options.

Study funding was provided by the U.S. Agency for Healthcare Research and Quality. The corresponding grant number is HHSA 290-2007-10061.