Getting a Grip on Memories 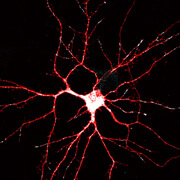 A neuron with GRIP1 in red.
Huganir lab

Having a fat head may not be a bad thing, according to new findings at The Johns Hopkins University. As reported in the February 9 issue of Neuron, Hopkins researchers have made a significant discovery as to how adding fat molecules to proteins can influence the brain circuitry controlling cognitive function, including learning and memory.

“When you learn something, you strengthen and inhibit certain transmissions and sculpt a particular circuit. Recall [or memory] is using that circuit again,” says Richard L. Huganir, Ph.D., professor and director of the Solomon H. Snyder Department of Neuroscience at Johns Hopkins. His team’s latest finding describes for the first time how one protein chemically alters another in this circuit strengthening process and represents another step toward understanding a key part of how memories are made and maintained within the brain, something researchers believe could provide a pathway toward treating disorders like Alzheimer’s and schizophrenia.

In studying the molecular underpinnings of learning and memory, Huganir and his team have focused on one of several processes in which a molecule is tagged by another molecule of fat. Tagging sends the molecules to a particular destination within a cell. Specifically, the team has studied DHHC5, which is known to add a fat molecule to other proteins. Until now it was not known which proteins receive this tag.

The scientists suspected a target molecule would need to bind DHHC5, which would then transfer fat onto it. To determine what DHHC5 could bind, they used it as bait in a large pool of rat brain proteins to fish for those that stuck to DHHC5. Within that pool, DHHC5 bound four different proteins, researchers found. Using a computer program, they compared these with other proteins implicated in learning and memory. All four shared similarity with the brain protein known as GRIP1, mutations of which have been linked to disorders such as autism. The scientists then tested GRIP1 and DHHC5 directly and found that they bound each other as well. Next, they put GRIP1 into human kidney cells, either by itself or with DHHC5, and analyzed each group of cells to see what happened. They found that only the GRIP1 proteins that were added to cells with DHHC5 were tagged with fat. From this they concluded that DHHC5 does indeed tag GRIP1 with fat.

The researchers then wanted to know if this process happens in a brain. However, they needed a way to look into a living cell and be able to tell apart GRIP1 that had a fat tag and GRIP1 that didn’t. They designed two distinct GRIP1 proteins: one permanently tagged with fat, and another mutated so that it could never be tagged. They added color markers to both proteins so they could track them under a microscope, and then added one type or the other to living brain cells. The fat-tagged proteins seemed to form clusters extending to the cell’s edges in a pattern resembling that of cellular recycling-center proteins. The untagged proteins, in contrast, seemed to diffuse around the center of the cell. From this, the team concluded that DHHC5 tags proteins like GRIP1 with fat to send them to be recycled.

According to Huganir, protein recycling is critical for strengthening and maintaining memory circuits. Since GRIP1 is involved with recycling, it may be important in this critical aspect of memory formation. Huganir believes some day researchers could learn how to control this mechanism and reverse the disease process for disorders like Alzheimer’s and schizophrenia.

“Some day we may be able to inhibit or activate these molecules,” Huganir says. “These molecules are involved in mediating everything in the brain, all behaviors.”

Besides Huganir, authors on this study include Gareth Thomas, Takashi Hayashi, Shu-Ling Chiu and Chih-Ming Chen.

This research was funded by the Howard Hughes Medical Institute and the National Institutes of Health.

Under a licensing agreement between Millipore Corporation and The Johns Hopkins University, Richard L. Huganir is a paid consultant to Millipore Corporation and is entitled to a share of royalties received by the university on sales of products described in this article. The terms of this arrangement are being managed by The Johns Hopkins University in accordance with its conflict-of-interest policies.

Related Stories:
Rick Huganir on the future of neuroscience and life-long learning

This is Your Brain On Fatty Acids

Researchers Discover How to Erase Memory