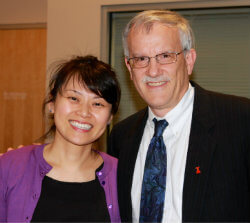 Johns Hopkins-led research into genetic factors that cause kidney disease to progress faster in African-Americans than in whites has been selected as one of the top 10 clinical research achievements of 2013 by the Clinical Research Forum.

The findings from the study, which were published in the New England Journal of Medicine on Dec. 5, 2013, combined data from two separate studies: the Chronic Renal Insufficiency Cohort (CRIC) Study and the African American Study of Kidney Disease and Hypertension (AASK). Both studies found that high-risk genetic variants in the gene APOL1 sped up kidney disease progression and substantially increased the risk of developing kidney failure, regardless of its cause. The findings suggest that variations in a single gene account for much of the racial disparity in kidney failure, investigators from The Johns Hopkins University’s schools of medicine and public health say.

An estimated 20 million or more American adults have chronic kidney disease, and over 400,000 people in the United States and 2 million worldwide depend on dialysis to treat kidney failure. Although exceedingly rare in whites, the APOL1 gene variant is found in 13 to 15 percent of African-Americans. Some have speculated that it evolved to protect against one of the two forms of African sleeping sickness, a lethal parasitic disease transmitted by the tsetse fly.

“One of the most striking health disparities is the huge burden of kidney disease in African-Americans. Our study highlights the importance of a particular gene, APOL1, as a major reason for this disparity,” says Appel. “We are honored to be recognized for this work.”

Made up of academic medical centers, professional organizations and industry partners, the Clinical Research Forum selects 10 scientists each year whose clinical research improves human health and alleviates suffering from disease. All research projects honored this year were published in 2013 and were funded by various federal agencies, foundations and corporations. In addition to the Johns Hopkins work, others on the top 10 list in 2013 focused on efforts to prevent ICU infections, find less invasive ways to gauge the success of kidney transplants, locate optimal dosing strategies for anticoagulation control and develop screening protocols for lung cancer. One discovered a potential new treatment for pediatric leukemia.

The CRIC study was established in 2001 by the National Institute of Diabetes and Digestive and Kidney Diseases to improve the understanding of chronic kidney disease and related cardiovascular diseases. The CRIC study has enrolled nearly 4,000 people with chronic kidney disease, with another 1,500 expected to join the study over the next five years.

The AASK is the largest and longest study of African-Americans with chronic kidney disease. Study participants were initially recruited in 1995.