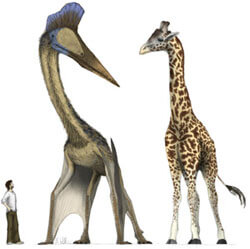 1 2
A modern-day man and giraffe, drawn to scale, flank the extinct pterosaur known as Hatzegotpteryx. Unlike birds, pterosaurs used four legs to launch themselves into flight, according to new research. Illustration by Mark Witton. * click on illustration for higher resolution version

January 6, 2009-  Pterosaurs have long suffered an identity crisis. Pop culture heedlessly — and wrongly — lumps these extinct flying lizards in with dinosaurs. Even paleontologists assumed that because the creatures flew, they were birdlike in many ways, such as using only two legs to take flight.

Now comes what is believed to be first-time evidence that launching some 500 pounds of reptilian heft into flight required pterosaurs to use four limbs: two were ultra-strong wings which, when folded and balanced on a knuckle, served as front “legs” that helped the creature to walk — and leap.

Publishing in Zitteliana, Michael B. Habib, M.S., of the Center for Functional Anatomy and Evolution at the Johns Hopkins University School of Medicine, reports his comparison of bone strength in the limbs of pterosaurs to that of birds and concludes that pterosaurs had much stronger “arms” than legs. The reverse is true of birds.

“We’ve all seen birds take off, so that’s what’s most familiar,” says Habib. “But with pterosaurs, extinct 65 million years and with a fossil history that goes back 250 million years, what’s familiar isn’t relevant.”

A supersized glitch is inherent in the traditional bipedal launch model, Habib notes: “If a creature takes off like a bird, it should only be able to get as big as the biggest bird.”

Birds use legs to launch, wings to flap. They don’t get launch power from wings or flight power from legs. In fact, when a bird is aloft, its legs become payload, or cargo. The muscle on the two back limbs that provides the power to launch must be carried and therefore limits size. Released of that handicap by employing all four legs to launch, giant pterosaurs could fly despite the fact that they were roughly the same size and shape as modern-day giraffes.

“The difference between pterosaurs and birds with regard to critical mechanical properties is very, very large,” Habib says, especially when you’re talking about the big pterosaurs; as the size gets bigger, the difference gets bigger too.”

For example, the wings of these fantastic hairy reptiles, most notably those of Quetzalcoatlus northropi, which spanned to an impressive 35 feet when the creatures were aloft, propelled the creatures into the air during take-offs that Habib describes as leap-frogging long-jumps: “Pterosaurs had long, huge front limbs, so no partner was required. Then, with wings snapping out, off they’d fly.”

Using computer scans to obtain cross-sectional images and geometric data for 155 bird specimens representing 20 species, Habib calculated the strengths of bones in bird limbs and compared these to three species of pterosaurs, the bones strengths of which he calculated using measurements from previously published sources. Structural strength, taking into account length and diameter, among other things, is a measure of how much force a bone can take before it fractures.

Habib also spent time crunching the numbers using the old, bipedal launch model and simply couldn’t find a mathematical solution that would enable the largest of the pterosaurs — using hind legs alone — to launch at all.

“But using all four legs, it takes less than a second to get off of flat ground, no wind, no cliffs,” he said. “This was a good thing to be able to do if you lived in the late Cretaceous period and there were hungry tyrannosaurs wandering around.”

It stands to reason that a large-bodied animal needing to produce lots of power at take-off would use four legs instead of two, Habib says: “We put V8 engines in our biggest, heaviest cars, not V-4s, like the one in my Camry.”

Assumption and convention — rather than reason or data — held sway for centuries, ever since the classical bipedal model of pterosaur take-off was first championed, he notes.

The research was funded by the Jurassic Foundation.  Habib, of Johns Hopkins, is the sole author of the paper.

A modern-day man and giraffe, drawn to scale, flank the extinct pterosaur known as Hatzegotpteryx. Unlike birds, pterosaurs used four legs to launch themselves into flight, according to new research. Illustration by Mark Witton.