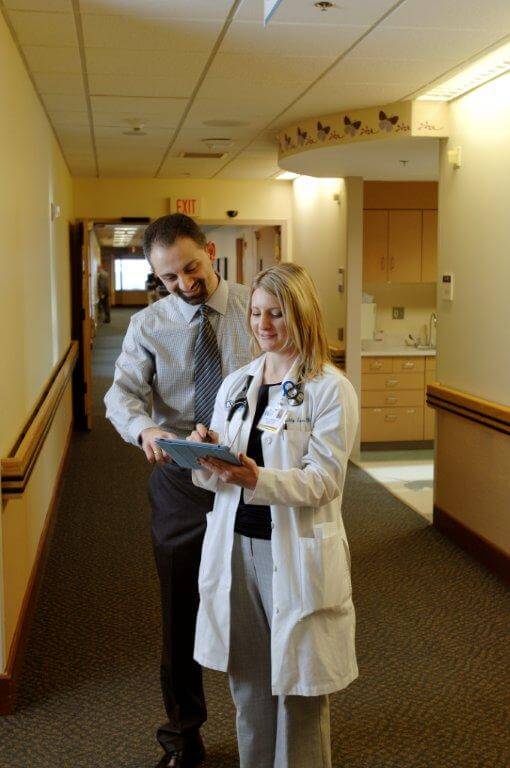 More and more medical centers are relying on hospitalists — hospital-based internal medicine specialists who coordinate the complex care of inpatients. Now,  an 18-month study comparing two hospitalist groups — one with a high physician assistant (PA)-to-physician ratio (“expanded PA”) and one with a low PA-to-physician ratio (“conventional”) — has found no significant differences in key clinical outcomes achieved by both groups.

The results of what is believed to be the first study of its kind suggest that hospitals can safely lower the cost of hospitalist programs without sacrificing quality of care, the investigators say.

A detailed report on the study at Anne Arundel Medical Center in Annapolis, Maryland, published in the Journal of Clinical Outcomes Management in October 2016, reveals no statistically significant differences in patient mortality, hospital readmissions within 30 days, lengths of stay and specialty consultant use among patients treated by the expanded PA group and those treated by the conventional group.

“We believe this is the first study of its kind to directly compare outcomes and costs between different staffing models using hospitalist PAs and hospitalist physicians. It shows that the expanded use of well-trained PAs within a formal PA-physician collaboration arrangement can provide similar clinical outcomes with lower costs, potentially allowing hospitalists to provide additional or different services,” says Henry Michtalik, M.D., M.P.H., M.H.S., an assistant professor of medicine at the Johns Hopkins University School of Medicine and the paper’s senior author.

In this study, conducted between January 2012 and June 2013, researchers implemented an expanded PA staffing model to see larger proportions of adult patients alongside physicians. The expanded PA group consisted of three physicians and three PAs, with PAs caring for 14 patients each day. At the same time, a conventional hospitalist group composed of nine physicians and two PAs had PAs caring for nine patients each day. Physicians in both groups cared for approximately 13 patients per day.

In both groups, each PA was formally paired with a physician who oversaw care. While PAs were responsible for independent rounding and clinical decision-making, physicians in both groups took primary rounding responsibility for patients with more complex cases. Both groups mandated an in-person physician visit at least every third hospital day.

Patients admitted to the hospital were assigned to one hospitalist group or the other depending on prearranged consultations with patients’ primary care physicians.

Each morning, patients were reassessed and designated a provider; patients would be seen by the same provider as the previous day whenever possible to maintain continuity. In the expanded PA group, 35.73 percent of visits were conducted by a PA, compared to 5.89 percent in the conventional group.

The research team compared readmissions within 30 days of discharge, inpatient mortality and costs of care between the two groups as primary outcomes for the study. The team measured the cost of care to patients by examining case charges associated with each caregiver encounter and classifying encounters as “physician only,” “physician co-visit” or “PA only.”

Consultant use — for example, cardiology consultations — and length of stay were also measured.

In the expanded PA group, 14.05 percent of patients (929 of 6,612) were readmitted within 30 days, while 13.69 percent (1,417 of 10,352) in the conventional staffing model were readmitted. The expanded PA group experienced a 1.3 percent inpatient mortality rate, while the conventional group experienced a 0.99 percent rate. None of these differences were statistically significant.

When comparing the study’s “standard” patient — one between 80 and 89 years old with Medicare insurance and a categorized major severity of illness, defined as the extent of physiologic decompensation or organ system loss of function — the patient’s average charge to a patient was $2,644 in the expanded PA group and $2,724 in the conventional group.

The results also showed that differences in consultant use and lengths of stay were not statistically significant between the two hospitalist groups. The expanded PA group used an average of 0.55 consultants per case, while the conventional group used an average of 0.56. The mean length of stay was 4.1 plus or minus 3.9 days for the expanded PA group and 4.3 plus or minus 5.6 days for the conventional group.

“This study shows that the expanded use of well-trained PAs within a formal PA-physician collaboration arrangement can provide similar clinical outcomes with lower costs,” Michtalik says. “The expanded PA model could free up physicians’ time to focus on more complex cases or allow hospitalists to provide additional or different services.”

Michtalik cautioned that the research focused only on a single medical center, and that research into the role of PAs in patient care needs much more attention. “As we address the challenges of an expanding older and more complex patient population in the setting of health care reforms and financial pressures, optimizing the patient care team and outcomes are high priorities,” he says. “Support, education and teamwork are essential for any staffing model to be successful.”

Capstack has ownership interest in Physicians Inpatient Care Specialists (MDICS). Segujja received compensation from MDICS for statistical analysis. Michtalik is supported by the Agency for Healthcare Research and Quality (1K08HS022331).