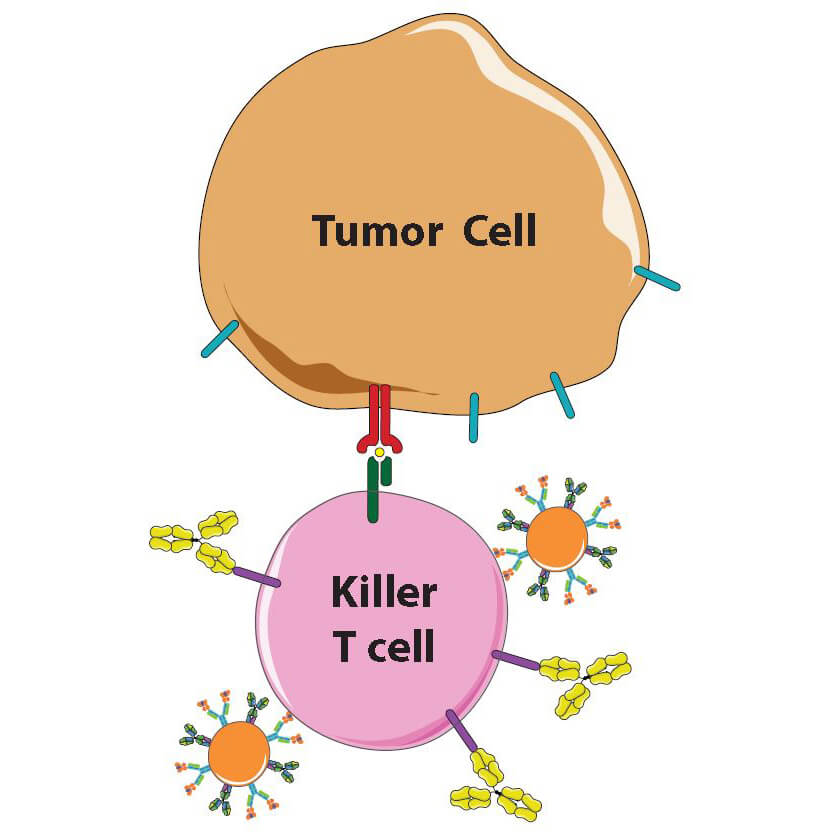 By combining two treatment strategies, both aimed at boosting the immune system’s killer T cells, Johns Hopkins researchers report they lengthened the lives of mice with skin cancer more than by using either strategy on its own. And, they say, because the combination technique is easily tailored to different types of cancer, their findings — if confirmed in humans — have the potential to enhance treatment options for a wide variety of cancer patients.

“To our knowledge, this was the first time a ‘biomimetic,’ artificial, cell-like particle — engineered to mimic an immune process that occurs in nature — was used in combination with more traditional immunotherapy,” says Jonathan Schneck, M.D., Ph.D., professor of pathology, who led the study together with Jordan Green, Ph.D., associate professor of biomedical engineering, both of whom are also members of the Kimmel Cancer Center.

A summary of their study results will be published in the February issue of the journal Biomaterials.

Scientists know the immune system is a double-edged sword. If it’s too weak, people succumb to viruses, bacteria and cancer; if it’s too strong, they get allergies and autoimmune diseases, like diabetes and lupus. To prevent the immune system’s killer T cells from attacking them, the body’s own cells display the protein PD-L1, which “shakes hands” with the protein PD-1 on T cells to signal they are friend, not foe.

Unfortunately, many cancer cells learn this handshake and display PD-L1 to protect themselves. Once scientists and drugmakers figured this out, cancer specialists began giving their patients a recently developed class of immunotherapy drugs including a protein, called anti-PD-1, a so-called checkpoint inhibitor, that blocks PD-1 and prevents the handshake from taking place.

PD-1 blockers have been shown to extend cancer survival rates up to five years but only work for a limited number of patients: between 15 to 30 percent of patients with certain types of cancer, such as skin, kidney and lung cancer. “We need to do better,” says Schneck, who is also a member of the Institute for Cell Engineering.

For the past several years, Schneck says, he and Green worked on an immune system therapy involving specialized plastic beads that showed promise treating skin cancer, or melanoma, in mice. They asked themselves if a combination of anti-PD1 and their so-called biomimetic beads could indeed do better.

Made from a biodegradable plastic that has been FDA-approved for other applications and outfitted with the right proteins, the tiny beads interact with killer T cells as so-called antigen-presenting cells (APCs), whose job is to “teach” T cells what threats to attack. One of the APC proteins is like an empty claw, ready to clasp enemy proteins. When an untrained T cell engages with an APC’s full claw, that T cell multiplies to swarm the enemy identified by the protein in the claw, Schneck explains.

“By simply bathing artificial APCs in one enemy protein or another, we can prepare them to activate T cells to fight specific cancers or other diseases,” says Green, who is also part of the Institute for NanoBioTechnology, which is devoted to the creation of such devices at Johns Hopkins.

To test their idea for a combined therapy, the scientists first “primed” T cells and tumor cells to mimic a natural tumor scenario, but in a laboratory setting. In one tube, the scientists activated mouse T cells with artificial APCs displaying a melanoma protein. In another tube, they mixed mouse melanoma cells with a molecule made by T cells so they would ready their PD-L1 defense. Then the scientists mixed the primed T cells with primed tumor cells in three different ways: with artificial APCs, with anti-PD-1 and with both.

The researchers next used artificial APCs loaded with a fluorescent dye to see where the artificial APCs would migrate after being injected into the bloodstream. They injected some mice with just APCs and others with APCs first mixed with T cells.

The following day, they found that most of the artificial APCs had migrated directly to the spleen and liver, which was expected because the liver is a major clearing house for the body, while the spleen is a central part of the immune system. The researchers also found that 60 percent more artificial APCs found their way to the spleen if first mixed with T cells, suggesting that the T cells helped them get to the right spot.

Finally, mice with melanoma were given injections of tumor-specific T cells together with anti-PD-1 alone, artificial APCs alone or anti-PD-1 plus artificial APCs. By tracking blood samples and tumor size, the researchers found that the T cells multiplied at least twice as much in the combination therapy group than with either single treatment. More importantly, they reported, the tumors were about 30 percent smaller in the combination group than in mice that received no treatment. The mice also survived longest in the combination group, with 45 percent still alive at day 20, when all the mice in the other groups were dead.

“This was a great indication that our efforts at immunoengineering, or designing new biotechnology to tune the immune system, can work therapeutically,” says Green. “We are now evaluating this dual strategy utilizing artificial APCs that further mimic the shapes of immune cells, such as with football and pancake shapes  based on our previous work, and we expect those to do even better.”

This work was supported in part by grants from the National Institute of Allergy and Infectious Diseases (AI072677, AI44129), the National Cancer Institute (CA108835, R25CA153952, 2T32CA153952-06, F31CA206344), the National Institute of Biomedical Imaging and Bioengineering (R01-EB016721), the Troper Wojcicki Foundation, the  Bloomberg~Kimmel Institute for Cancer Immunotherapy at Johns Hopkins, the JHU-Coulter Translational Partnership, the JHU Catalyst and Discovery awards programs, the TEDCO Maryland Innovation Initiative, the Achievement Rewards for College Scientists, the National Science Foundation (DGE-1232825), and sponsored research agreements with Miltenyi Biotec and NexImmune.

Under a licensing agreement between NexImmune and The Johns Hopkins University, Jonathan Schneck is entitled to a share of royalty received by the university on sales of products described in this article.  He is also a founder of NexImmune and owns equity in the company.  And he serves as a member of NexImmune’s Board of Directors and scientific advisory board. Jordan Green is a paid member of the scientific advisory board for NexImmune and owns equity in NexImmune. The terms of these arrangements have been reviewed and approved by The Johns Hopkins University in accordance with its conflict of interest policies.