Study suggests some symptoms in human version of the disorder could be eased
Release Date: October 3, 2014 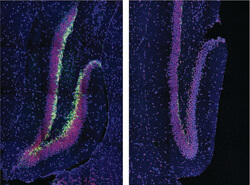 Young neurons in the dentate gyrus shown in green in a normal mouse (left) and a sibling with a Kabuki syndrome-like condition (right).
Johns Hopkins Medicine

Studying mice with a genetic change similar to what is found in Kabuki syndrome, an inherited disease of humans, Johns Hopkins researchers report they have used an anticancer drug to “open up” DNA and improve mental function.

Along with a potential treatment for the intellectual disability seen in Kabuki syndrome, the study’s findings also suggest a new way of thinking about a category of genetic diseases known as Mendelian disorders of the epigenetic machinery, the researchers say. In these disorders, a genetic mutation causes errors in the way proteins and chemicals bind to DNA, which in turn affects the rate at which DNA make proteins. In the case of a Kabuki syndrome-like condition in mice, the researchers found that those errors lead to a persistent but treatable decrease in new cell growth in one part of the brain. Their study adds to the growing evidence that intellectual disability may not always be irreversible.

A report on the research appeared online Oct. 1 in the journal Science Translational Medicine.

“Mendelian disorders of the epigenetic machinery affect how cells ‘package’ and use DNA, so they tend to have complicated and far-reaching effects,” says Hans Bjornsson, M.D., Ph.D., an assistant professor of pediatrics and genetics in the Johns Hopkins University School of Medicine’s McKusick-Nathans Institute of Genetic Medicine. “Finding that a drug can ease some of the symptoms in this group of disorders suggests that other Mendelian disorders of the histone machinery may be treated in a similar manner.” Bjornsson led the study in collaboration with Harry "Hal" Dietz, M.D., the Victor A. McKusick Professor of Medicine and Genetics and director of the William S. Smilow Center for Marfan Syndrome Research.

Bjornsson heads the McKusick-Nathans Epigenetics and Chromatin Clinic. His research focuses on Kabuki syndrome, which is caused by mutations in one of two genes that govern proteins that DNA wrap around. DNA wound around the packaging proteins is known as chromatin; only by forming chromatin can several feet of DNA fit inside the tiny command centers of each cell. But in order for a cell to read the DNA and put it to use making new proteins of its own, the chromatin must temporarily open up.

Specialized enzymes, often called “writers” and “erasers,” add or subtract chemical groups to the packaging proteins to help induce the chromatin to open or close. In recent years, other researchers have found that Kabuki syndrome can be caused by mutations to one of two genes — one for a writer, one for an eraser — with the same net effect on chromatin opening. That finding led Bjornsson and his collaborators to suspect that Kabuki syndrome and similar conditions might be caused by an imbalance between chromatin’s open and closed states.

If true, that would mean that disorders of the histone machinery could be treated by altering the balance between open and closed states, Bjornsson says. To test the idea, Joel Benjamin, a graduate student in Bjornsson’s lab, used mice with a mutation in one of the Kabuki syndrome genes and a condition similar to Kabuki syndrome.

When the mice were at their young adult phase, the team treated them with AR-42, a drug developed for cancers of the blood that was already known to open up compacted chromatin. After two weeks of treatment, they put the mice through a drill called the Morris water maze, which tests their ability to form memories in a region of the brain called the hippocampus. The treated mice performed better than the untreated mice with the Kabuki-like condition — about as well as healthy mice.

Studying the brains of the treated mice, the researchers saw that compared to untreated peers, they had more newly formed neurons in a part of the hippocampus called the dentate gyrus. “The dentate gyrus is important for memory formation, and it’s also one of the few places in adult brains where we see new neurons,” Bjornsson says. “We think that when DNA’s chromatin open up, the cells are able to ‘turn up’ one or more genes needed for that new growth.”

A treatment for any inborn intellectual disability in people — including Kabuki syndrome — could still take a decade or more to develop, Bjornsson cautions. His next steps will be to home in on the dentate gyrus to see whether it really is the main source of the memory defect found in the Kabuki mice and to explore whether there are other potential drugs that have a similar effect.

Other authors on the paper were Li Zhang, Elizabeth E. Gerber, Yi-Chun Chen, Michelle C. Potter and Kasper D. Hansen of The Johns Hopkins University; and Jacqueline Weissman and Rebecca Vaurio of the Kennedy Krieger Institute.

This work was supported by the William S. Smilow Center for Marfan Syndrome Research, the Howard Hughes Medical Institute, the National Institutes of Health’s Director’s Early Independence Award (grant number DP5OD017877) and the American Academy of Pediatrics’ Section on Genetics and Birth Defects.