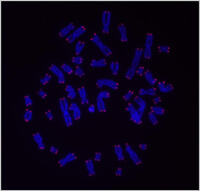 New evidence has emerged from studies in mice that short telomeres or “caps” at the ends of chromosomes may predispose people to age-related diabetes, according to Johns Hopkins scientists.

Telomeres are repetitive sequences of DNA that protect the ends of chromosomes, and they normally shorten with age, much like the caps that protect the end of shoelaces.  As telomeres shorten, cells lose the ability to divide normally and eventually die.  Telomere shortening has been linked to cancer, lung disease, and other age-related illnesses.   Diabetes, also a disease of aging, affects as many as one in four adults over the age of 60.

The Johns Hopkins research, described in the March 10 issue of PLoS One, arose from physician-scientist Mary Armanios’ observation that diabetes seems to occur more often in patients with dyskeratosis congenita, a rare, inherited disease caused by short telomeres.  Patients with dyskeratosis congenita often have premature hair graying and are prone to develop early organ failure.

“Dyskeratosis congenita is a disease that essentially makes people age prematurely.  We knew that the incidence of diabetes increases with age, so we thought there may be a link between telomeres and diabetes,” says Armanios, assistant professor of oncology at the Johns Hopkins Kimmel Cancer Center.

Armanios studied mice with short telomeres and their insulin-producing beta cells.  Human diabetics lack sufficient insulin production and have cells resistant to its efficient use, causing disruption to the regulation of sugar levels in the blood.  Armanios found that despite the presence of plentiful, healthy-looking beta cells in the mice, they had higher blood sugar levels and secreted half as much insulin as the controls.  “This mimics early stages of diabetes in humans where cells have trouble secreting insulin in response to sugar stimulus,” says Armanios.

“Many of the steps of insulin secretion in these mice, from mitochondrial energy production to calcium signaling, functioned at half their normal levels,” says Armanios.

In beta cells from mice with short telomeres, they found disregulation of p16, a gene linked to aging and diabetes.  No such mistakes were found in the controls.

In addition, many of the gene pathways essential for insulin secretion in beta cells, including pathways that control calcium signaling, were altered in beta cells from mice with short telomeres.

Armanios says that some studies have suggested that diabetic patients may have short telomeres, but it was not clear whether this contributes to diabetes risk or is a consequence of the disease.

“Age is the most important risk factor for diabetes, and we also know that family heredity plays a very important role.  Telomere length is an inherited factor and may make people more prone to develop diabetes,” says Armanios.