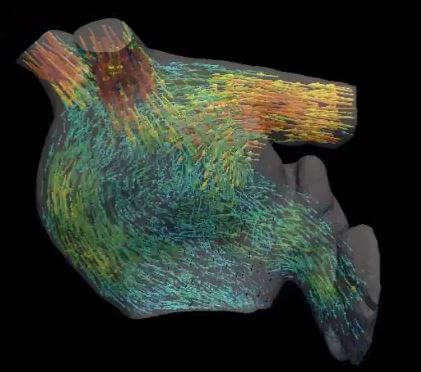 The trajectory of blood flowing into the left atrium from the pulmonary veins.
Credit: Hiroshi Ashikaga

Using specialized CT scans of a healthy heart and one with heart disease, a team of Johns Hopkins cardiologists and biomedical engineers say they’ve created computer models of the “shape” of blood flow through the heart’s upper left chamber that someday may help predict stroke risk.

Specifically, their computer visualizations found that blood in the diseased heart failed to flow in corkscrewlike “eddies” that most effectively moved blood out of the left atrium in the healthy heart and “showed us exactly how this motion would increase the risk of developing a blood clot,” says Hiroshi Ashikaga, M.D., Ph.D., assistant professor of medicine and member of the Heart and Vascular Institute at the Johns Hopkins University School of Medicine.

The researchers say the same fluid motion analysis used in their two-heart proof-of-concept study may one day offer an accurate way to predict stroke risk in people with heart disease marked by enlargement and weakness of the cardiac muscle.

A description of the study and its results was published in the November print issue of Annals of Biomedical Engineering.

“By looking at blood flow through the atrium, we think we can accurately assess stroke risk better than such risk factors as heart size and pumping strength,” says Ashikaga. “Our study fills in a missing diagnostic link between heart function and fluid motion in our understanding of how each can affect stroke risk.”

Before this study, Ashikaga notes, researchers knew that enlargement of the heart, particularly the left upper chamber, was linked to increased stroke risk, particularly in people with atrial fibrillation, an irregular and often very rapid heart rate. Heart disease experts estimate that more than 1.6 million Americans each year are diagnosed with symptoms of atrial fibrillation that put them at risk for strokes caused by blood that pools in the heart and forms a clot, then travels to the brain.

To collect the data needed to create the blood flow models, the Johns Hopkins team recruited two patients with a history of atrial fibrillation — a 58-year-old woman with a healthy heart and a 68-year-old man with an enlarged heart. Each underwent a CT scan of their heart.

Using the images, the researchers then computed the movement of blood flow as it entered the left atrium from the pulmonary veins, then passed through a valve into the left lower chamber, or ventricle. Finally, they fashioned a video representation of the fluid motion of the blood.

In visualizing the healthy heart, the researchers saw that the blood flow formed into tight, corkscrewlike motions that circled around into doughnut formations, known as vortexes. The researchers say the vortexes helped move the blood efficiently through the atrium quicker and with less contact with the atrium’s surface tissue. See blood flow modelled in a healthy heart here.

The diseased heart they chose to examine was enlarged due to overuse, muscle fatigue and scarring, all of which can promote atrial fibrillation.

In the enlarged heart, the researchers noticed that at the top of the atrium, the blood never fully forms the corkscrews that loop around into vortexes. Instead, by the time the blood reaches the bottom of the atrium, it seems to be falling in “sheets” that coat the surface of the heart. See blood flow through a diseased heart here.

“As the blood comes in contact with the atrium’s surface, it slows down due to shearing forces similar to friction, and this appears to prevent the blood from exiting the chamber as smoothly as it might,” says Ashikaga. “The slower the blood moves and the more contact it has with the atrium, the more risk there is for a clot to form.”

Ashikaga says his team is currently conducting a larger long-term study looking at the blood flow of many more people with normal and ailing hearts, and monitoring the incidence of stroke and other signs of blood clots over time.

He also hopes to develop the CT scan and computer analysis into a tool to predict stroke risk.

According to the Centers for Disease Control and Prevention, an estimated 3 million to 6 million people have atrial fibrillation and nearly 800,000 people have strokes each year in the United States. The most common symptom of stroke is numbness or weakness on one side of the body. Physicians use CT scans of the brain, blood tests, EKGs, MRI scans or other imaging test to determine if a person has suffered from a stroke. Strokes may be treated with clot-busting drugs, blood thinners and sometimes surgery to remove the clot.

The research was funded by grants from the Japan Society for the Promotion of Science, Magic That Matters Fund for Cardiovascular Research and the Zegar Family Foundation.

The image and video that accompany this news release are available for download.