Clues Point to Cause of a Rare Fat-Distribution Disease 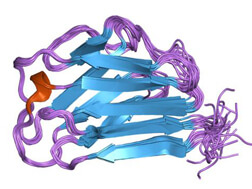 The tail end of the protein lamin A, where new SUMO1 attachment sites were discovered.
Public domain, via Wikimedia Commons (http://www.ebi.ac.uk/)

Studying a protein that gives structure to the nucleus of cells, Johns Hopkins researchers stumbled upon mutations associated with familial partial lipodystrophy (FPLD), a rare disease that disrupts normal patterns of fat distribution throughout the body.

“Our findings open new paths for learning how and why fat cells are disproportionately affected by mutations in the protein lamin A, which is found in the nucleus of most cells of the body,” says Katherine Wilson, Ph.D., professor of cell biology at the Johns Hopkins University School of Medicine.

According to the researchers, this is the first report that another protein, SUMO1, can attach to lamin A. Importantly, they found that FPLD-causing mutations in lamin A prevent this attachment. Details of the study were published in the Feb. 1 issue of the journal Molecular Biology of the Cell.

Wilson says lamin A is primarily known for giving shape to the nucleus. “It forms networks of strong ‘cables’ at the nuclear membrane and works with other proteins to create and maintain the three-dimensional environment in which chromosomes are properly organized, protected and expressed,” she says.

When the Wilson group made their discovery, they were studying lamin A binding to another protein, actin. Actin can sometimes form a complex with certain SUMO proteins, small proteins often attached to other proteins to alter their functions, their locations and their interactions with additional proteins.

“Sometimes you go into an experiment looking for one thing but you find another,” says Wilson. “We wanted to know if lamin A could bind to actin-SUMO1 complexes. Instead, we found that SUMO1 itself attaches to lamin A.”

SUMO1 is usually attached to proteins at sites with certain properties; these sites can be predicted by the surrounding amino acids, the basic building blocks of proteins whose blueprints are found in genes. So the researchers searched lamin A’s amino acid sequence for predicted binding sites and found five. Using targeted genetic techniques, they created lamin A variants, each with a mutation at a different predicted SUMO1 attachment site. They then added SUMO1 to the mutants and tested whether it could attach to them or not.

FPLD is a very rare condition that starts around puberty. Fat on the legs of patients is reduced while it accumulates at other locations, including the neck and face. Patients can also become diabetic.

Other authors of the report include Dan Simon of the Johns Hopkins University School of Medicine and Tera Domaradzki and Wilma Hofmann of the University at Buffalo, The State University of New York.

This work was supported by grants from the National Institute of General Medical Sciences (RO1 GM048646) and the Department of Defense CDMRP (PC111523).

On the Web:
Link to article in MBoC

Related Story:
Promising Pursuits: Name That Field (the final story of the article)