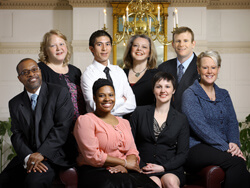 Martin Luther King III, a noted civil rights and community leader who spoke at Hopkins’ first commemoration in 1982, will serve as keynote speaker at this year’s milestone event honoring his father, slain civil rights leader Dr. Martin Luther King Jr. The theme is “Peace, Love and Dignity: King’s Ultimate Challenge.” In what has become a much-anticipated annual tradition, Johns Hopkins Medicine will remember and honor Dr. King with tributes, music and community service awards. The celebration, which will take place on Friday, Jan. 6, from noon to 1:30 p.m. in Turner Auditorium, is only for employees and not the general public.

“It is with great pride that we honor Dr. King’s memory, and after more than a quarter-century, Hopkins leadership continues to place significant value on this event,” says Levi Watkins Jr., M.D., associate dean for postdoctoral programs and professor of cardiac surgery at the Johns Hopkins University School of Medicine. Watkins launched the MLK commemoration in 1982 to honor the man who was his pastor and mentor while growing up in segregated Montgomery, Ala. “Dr. King proved,” he says, “that there are indeed no boundaries for men and women who are dedicated to the dream he articulated.”

Additionally, this year’s Martin Luther King Jr. Ideals Award will go to a recipient whose name will be announced during the event.

Watkins again presides as master of ceremonies. Unified Voices, a chorus of Hopkins employees and community members, will provide entertainment during the commemoration.