Cellular ‘Garbage Disposal’ Has Another Job 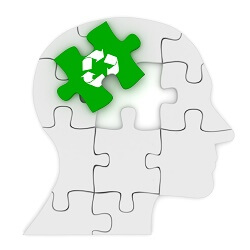 Proteasome-dependent recycling in the brain: another piece of the puzzle.
Credit: iStock

A subset of protein complexes whose role has long been thought to consist only of chemically degrading and discarding of proteins no longer needed by cells appears to also play a role in sending messages from one nerve cell to another, Johns Hopkins Medicine researchers report.

A summary of the research on so-called proteasomes, performed in animal cell cultures and brain tissue, is published in the April issue of Nature Structural & Molecular Biology.

The investigators say the work could eventually open new paths in research about learning, memory and brain disease.

In 1980, researchers from Israel and the United States discovered proteasomes and their role in breaking down proteins — work that netted them the Nobel Prize in Chemistry in 2004. Thought to be confined to the cytoplasm, or the interior of cells outside of the nucleus, proteasomes have long been considered part of cells’ “garbage disposal” system, explains Kapil V. Ramachandran, a doctoral student in the Department of Biological Chemistry at the Johns Hopkins University School of Medicine.

“Once unwanted proteins are delivered to proteasomes, these large complexes act like a paper shredder. They cut proteins into tiny pieces,” he explains. These pieces are then reused to make new proteins, Ramachandran adds. “It’s basically a way of recycling proteins in cells.”

Because this process takes hours or days to complete, says Seth S. Margolis, Ph.D., assistant professor of biological chemistry and neuroscience at the Johns Hopkins University School of Medicine, blocking proteasomes’ activity with chemical inhibitors shouldn’t affect any shorter-term cellular functions. However, previous research has shown that these chemical inhibitors can rapidly affect signaling across neurons within seconds.

Wondering whether some traditional assumptions about proteasomes might be wrong, Ramachandran and Margolis first looked to see if proteasomes might be located beyond the cytoplasm. Using a method called immuno-electron microscopy to examine proteins labeled by antibodies in cells, they searched for proteasomes in cultured mouse neurons.

To their surprise, Margolis says, they found some proteasomes embedded in the cells’ membranes, a place where these protein complexes had not been seen before, to their knowledge. Several other biochemical tests, such as membrane fractionation — a technique in which the researchers separated the membrane from other parts of the cell and looked to see what components are present — confirmed these findings.

“Taking the whole system apart allowed us to confirm that this was what we were really seeing,” Margolis says.

The researchers then turned their attention to figuring out what these proteasomes were doing in this unusual location. Knowing that proteasomes usually degrade proteins, the researchers applied radioactive amino acids — components that make up proteins — to neurons to label proteins made inside neurons.

Biochemical approaches showed that these amino acids were incorporated into all proteins. Soon after, peptides (small units of proteins) that carried these radioactive amino acids were pumped to the outside of cells. When the researchers treated neurons with a chemical inhibitor that only blocked the membrane proteasome, they saw that this inhibitor blocked this release of peptides outside the cell. This suggested that the membrane-bound proteasome had degraded the tagged proteins and expelled them to the cell exterior.

When the researchers treated groups of neurons with their chemical inhibitor of the neuronal membrane-bound proteasomes, they found that calcium signaling between these cells went awry. Because calcium signaling is essential to cell-to-cell communications, these results suggested that the expelled peptides might be important for cellular messaging, Margolis says. Sure enough, he notes, when he and Ramachandran treated neurons with purified peptides expelled from the proteasomes, the cells rapidly began signaling.

Together, the researchers say, these findings suggest that the neuronal membrane-bound proteasome is vitally important for cell signaling. Their experiments bring up a host of new questions about what specific proteins this complex is degrading, what compounds it’s expelling and what happens when this system breaks down, Ramachandran says. He and Margolis, he says, are already discovering links between glitches in this system and neurological disease, such as neurodegeneration.

“Realistically, understanding the different facets of this newly discovered proteasome could take a lifetime to work out,” he says.