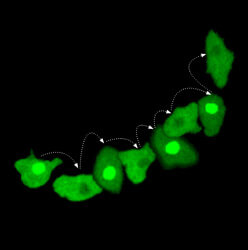 Levels of the regulatory protein GtaC, tagged with green fluorescent protein, increase in the nucleus (round, bright spot) every six minutes. GtaC turns on genes that prepare cells to move. The image is a compilation of eight photos, taken at 3.5 minute intervals, showing GtaC’s location in a single cell as it moves.
Huaqing Cai

Johns Hopkins biologists have discovered that when biological signals hit cells in rhythmic waves, the magnitude of the cells' response can depend on the number of signaling cycles — not their strength or duration. Because such so-called “oscillating signaling cycles” are common in many biological systems, the scientists expect their findings in single-celled organisms to help explain the molecular workings of phenomena such as tissue and organ formation and fundamental forms of learning.

In a report to be published online in the journal Science on March 21, the investigators say their experiments in amoebae show how repeated pulses of a signal cause short bursts of specific gene activity, the products of which linger and build with each new pulse. The cumulative amount of these gene products ultimately affects changes in cell fate.

"The mechanism we discovered here illustrates how a single cell can keep track of the number of times it has received a signal," says Peter Devreotes, Ph.D., professor and director of the Department of Cell Biology. "In most signaling systems, the cellular response depends on the strength or duration of the signal. This system allows the cells to count."

The Devreotes team says they figured out this signaling system in the amoeba Dictyostelium discoideum, a single-celled organism that can cluster to form a multi-celled structure that helps it survive when resources are scarce. At the heart of this process, they say, is a communication molecule called cAMP, a chemical released by starving cells in periodic spurts — every six minutes — that is sensed by other cells nearby. The signal triggers a series of steps needed for the cells to join together and form specialized types of cells within the group makeup.

Devreotes says, “We have known since the 1970s that the cAMP signals achieve their best effect when they arrive every six minutes — not more and not less — but we had no idea why.”

To find out, the Johns Hopkins team focused on the behavior of a regulatory protein called GtaC, which is similar to the human GATA genes known to control stem cell fate in many tissues. Amoebae that lack GtaC can’t activate the genes that enable the initially similar cells to cluster and to become the specialized cell types of the multicellular structure.

When the researchers attached GtaC to a protein that glows green, they saw that it entered the amoeba cell nucleus, left the nucleus and then entered again at a pace like the six-minute pulses of cAMP. If the researchers gave the cells a continuous supply of cAMP, GtaC would leave the nucleus after a brief lag and remain outside of it for as long as cAMP was present. When they removed cAMP, GtaC would re-enter the nucleus.

The researchers then engineered GtaC to stay put in the nucleus and found that the cells began to come together and specialize prematurely. However, in cells that lacked cAMP, the team found that these processes were not turned on even with GtaC in the nucleus.

To better understand the role of GtaC, the researchers used a protein that can glow to show when GtaC turned on a particular gene. What they found was another rhythmic, six-minute pattern of activity: The glowing spots indicating gene activity peaked in intensity approximately every six minutes and lagged about three minutes behind the peak of GtaC accumulation in the nucleus. According to Devreotes, this three-minute lag is likely due to the time it takes for the gene to be turned on and seen.

"It’s likely that when GtaC is in the nucleus, it begins in an inactive state and only starts turning on genes after the cell receives an external cAMP signal. But it only has a very short window of time in which to work because the cAMP signal not only activates GtaC but also drives it out of the nucleus,” says Huaqing Cai, Ph.D., a research associate in the Devreotes laboratory and the principle author on the paper.

Devreotes explains that the result of this system is that the total amount of gene activity in each cell depends entirely on the number of cycles it goes through, not on the total amount of cAMP received or the length of time it was exposed to cAMP. "The rhythmic reception of cAMP actually maximizes the activity of the developmental genes," he says. "It synchronizes the development of all of the cells in the population, like a conductor keeping time for the members of an orchestra."

“This system is similar to the simple electrical circuits in computers that enable them to count,” says Devreotes. “But we think it could be sophisticated enough to explain more complex behaviors, like simple learning that depends on repeated stimulation. Snails, for example, can learn to modify their behavior when a stimulus is administered repeatedly. This behavioral change lasts for several days and has been shown to involve changes in gene activity in the nerves of the snails. Continuous application of the stimulus does not induce the behavioral change, though. So, as in the mechanism we have found here, the repeated on-again/off-again rhythm of the signal is crucial for eliciting the changes in gene expression.”

The researchers believe that this signaling system may also explain some of the cell fate changes that occur during embryonic development.

Other authors of the report include Yu Long of the Johns Hopkins University School of Medicine; Mariko Katoh-Kurasawa, Balaji Santhanam and Gad Shaulsky of the Baylor College of Medicine; Tetsuya Muramoto and Masahiro Ueda of RIKEN Quantitative Biology Center in Japan; and Lei Li of the University of Virginia.

Related Stories:
'Random' Cell Movement Is Directed From Within

The Hunt for the Cell's Compass