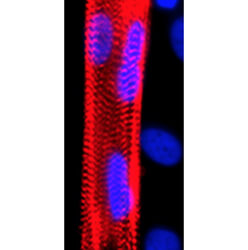 Johns Hopkins researchers report they have inadvertently found a way to make human muscle cells bearing genetic mutations from people with Duchenne muscular dystrophy (DMD).
A report on the feat, published online in the journal Cell Reports on May 26, should shed light on how subtle genetic differences among DMD patients produce symptoms with a wide range of severity and disability. The cells, they say, could also be used to test new therapies.
The serendipitous discovery had its origins about three years ago, when the scientists, led by Gabsang Lee, Ph.D., D.V.M., were looking for a new way to turn human embryonic stem cells — which can become any cell in the body — into so-called neural crest cells, which build part of the nervous system in developing vertebrates.
As they tested different compounds, they discovered a recipe — four days in culture with the compound CHIR99021, followed by eight days with the compound DAPT — that caused cells to spontaneously contract (see VIDEO below) as if they were muscle fibers. To their surprise, says Lee, analysis confirmed that, after 30 days, about 60 percent of the cells in their lab dishes were making proteins associated with muscle cell maturation.
Muscle fibers form when cells known as myoblasts, containing a single nucleus, mature and fuse together to form myotubes with multiple nuclei, which further mature into muscle fibers that contract. “The fusion of myoblasts into myotubes is one of the most distinctive features of skeletal muscle,” says Lee, an assistant professor of neurology at the Johns Hopkins University School of Medicine. “What we can now do is make fusion-capable myoblasts, which are easy to grow and therefore make it easier to study how diseases like DMD interfere with the fusion process.”
To confirm its finding, the research team applied its “recipe” to induced pluripotent stem (iPS) cells generated from the skin cells of a dozen healthy donors and from five patients with DMD, each with a different genetic variation. With both healthy iPS cells and DMD iPS cells, the scientists were able to create myoblasts that could generate myotubes, though the DMD-derived cells were 10 times less efficient at fusing and couldn’t contract.
DMD is an inherited disorder that affects approximately one in every 3,600 newborn boys. It is marked by steadily weakening muscles and premature death, usually in a patient’s 20s or 30s. At fault are mutations in the largest known human gene, one that makes dystrophin, a protein that normally strengthens muscle fibers and protects them from injury. Carried on the X chromosome, more than 1,000 variations have been found within the gene, causing a large range of symptoms.
To figure out what all of those mutations have in common, the researchers say they analyzed gene and protein activity in the lab-grown myoblasts. As expected, myoblasts generated from healthy and DMD iPS cells all showed increased levels of activity in skeletal muscle genes, but DMD myoblasts did not make dystrophin. Compared to healthy myoblasts, the DMD myoblasts showed greater activity in genes associated with wound healing and inflammation.
To confirm its findings, the team used a genetic technique to hone in on the activity of 17 genes whose levels appeared at least twice as high in the DMD myoblasts in the previous genetic test. Myoblasts generated from the five DMD patients showed varying levels of these genes, though all showed increased activity in the genes BMP4 and TGFbeta.
“Generating myoblasts from patients with different mutational versions of DMD will allow us to study the effects of different mutations at the cellular level,” says Lee. “We hope to figure out why some mutations cause faster symptom progression than others and what can be done to tailor treatments to individual patients.”
To see whether some DMD mutations might be correctable in the laboratory, the researchers took skin cells from DMD patients and introduced a small artificial chromosome carrying a good copy of the dystrophin gene. They then reprogrammed the skin cells to become iPS cells and grew them into myoblasts. When transplanted into mice with damaged leg muscles, these cells were able to fuse with the wounded muscle.
The scientists also saw more normal levels of gene activity, including dystrophin, in the corrected cells and six times more myoblast fusion than in uncorrected DMD cells. The corrected cells were also able to fuse with uncorrected cells in the laboratory.
Finally, the scientists tested a drug therapy option on the DMD myoblasts they grew in the lab: the compounds LDN193189 and SB431542, inhibitors of the overactive genes BMP and TGFbeta. They found that the cells secreted less BMP4, and the DMD myoblasts from four of the five patients were able to fuse normally again.
Lee cautions that the experiments are very early-stage work that will have to be extensively verified through years of animal studies before there are any possible clinical applications for patients. But if those further studies pan out, Lee says, the lab-grown cells could one day provide a potential source of large numbers of myoblasts that could be genetically corrected and then transplanted into the same patients they came from.
Other authors of the report include In-Young Choi, Hotae, Lim, Kenneth Estrellas, Jyothi Mula, Tatiana Cohen, Yuanfan Zhang, Christopher Donnelly, Jean-Philippe Richard, YongJun Kim, Hyesoo Kim, Jeffrey Rothstein, Nicholas Maragakis and Kathryn Wagner of the Johns Hopkins University School of Medicine; Yasuhiro Kazuki and Misuo Oshimura of Tottori University, Japan; and Hongmei Lisa Li and Akitsu Hotta of Kyoto University, Japan.
This work was supported by funding from the National Institutes of Health, the New York Stem Cell Foundation, the Maryland Stem Cell Research Fund, the Muscular Dystrophy Association, the FSH Society and Team Saij.