Can You Feel The Heat? Your Cilia Can 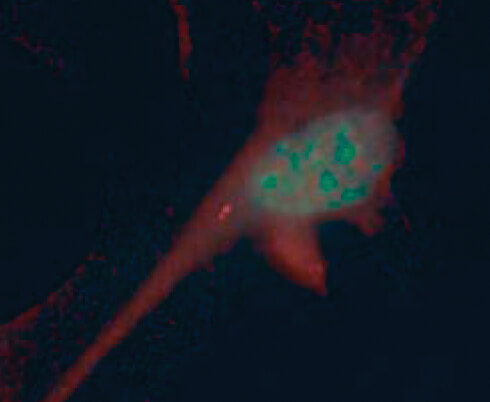 Johns Hopkins researchers and colleagues have found a previously unrecognized role for tiny hair-like cell structures known as cilia: They help form our sense of touch.

Humans and genetically engineered mice lacking functional cilia respond more slowly to physical sensations such as exposure to hot water or a sharp poke with a stick. Results of the study, appearing in Proceedings of the National Academy of Sciences this week, will help doctors better understand diseases already linked to defective cilia like Bardet-Biedl syndrome (BBS) and polycystic kidney disease (PKD)

Cilia, tail-like projections found on the surface of cells, are perhaps best known as molecular flippers that help cells move around. Recently, researchers like Nico Katsanis, Ph.D., associate professor at Johns Hopkins’ McKusick-Nathans Institute of Genetic Medicine, have found that cilia are important for many other biological processes, including three of our five senses: vision, hearing, and smell (ciliopathies are often characterized by loss or deficiency in these senses). “That leaves two unexplored possibilities,” says Katsanis. “Taste and touch; we tried touch.”

In the current study, the research team performed a pair of tests on both normal mice and engineered mice with defective cilia (Bbs -). To test heat sensitivity, they immersed the tails of the mice in warm water and measured how long before the mice flicked their tails. To test mechanical force, the researchers applied increasing (but not painful) pressure to the hind feet of mice until they withdrew their paws.

In both tests, the response time of the Bbs- mice to these external stimuli was longer. “These mutant mice can still feel the heat and pressure,” explains Katsanis. “They just have a higher threshold for registering the sensation.” Since the Bbs- mice had normal coordination on a spinning rotor, their slower responses likely weren’t due to motor problems.

Norimasa Mitsuma, Ph.D., a postdoctoral student in Katsanis’s lab, also demonstrated that the defective cilia weren’t hindering brain function.  He repeatedly dunked one hind paw in hot water for an hour and then carefully measured nerve activity at the base of the spinal cord - the junction between leg and brain. While regular mice displayed clear spinal nerve activity, Bbs- mice did not. This highlighted that the problem with Bbs- mice is that sensory information cannot reach the brain.

To find out whether people with inherited conditions that affect cilia also had different sensation thresholds, the researchers recruited nine patients with BBS, an inherited disorder characterized by obesity, polydactyly and vision loss.

The patients were asked to do seven simple perception tests, such as detecting the vibration of a tuning fork on their wrist or guessing the weight and shape of an object just by feeling it. All nine patients were less able than non-BBS patients to form the right response in at least some of the tests.

“This will certainly aid our efforts to both diagnose ciliopathies and relate to the patients,” says Katsanis. “People with ciliopathies are often thought to have mental retardation or autism because they appear ‘slow’.  Now it appears that many aspects of their mental capacity may be just fine, they are just slow because they can’t sense things as well as other individuals.”