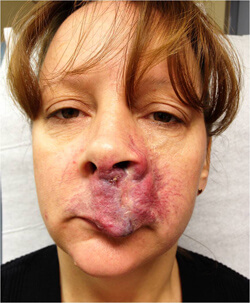 Using a technique performed at Johns Hopkins but rarely elsewhere, imaging specialists and surgeons have successfully used precision, image-guided technology to glue shut a tangle of abnormal blood vessel growths in a 43-year-old woman’s upper lip, face and nose. Surgery had earlier been ruled out because traditional approaches were considered too risky.

Susan Adams, an accountant from Owings, Md., says her arteriovenous malformation (AVM) had caused a decade of spontaneous nose and lip bleeds that were difficult to control, and that more than a half dozen previous operations had failed to stop the bleeding or facial disfigurement.

Adams’ condition is rare and notoriously difficult to treat. Her AVM had grown –for no known reason – between her upper lip and base of her nose. As it grew, her upper lip and skin above it had bulged out, causing the lower-left side of her face to droop. If left untreated, the condition can lead to life-threatening blood loss from a burst vessel.

For her May 14 procedure, which took about two hours at The Johns Hopkins Hospital, interventional neuroradiologist Monica Pearl, M.D., used an ultrathin needle, precisely guided from the outside in by real-time ultrasound scanning and angiography, to puncture Adams’ facial skin and several of the outermost and largest tangled blood vessels. Once the needle was inside the abnormal blood vessels, which are no more than 1 to 2 millimeters wide, Pearl injected a glue-like substance to block each vessel and cut off the blood supply to any smaller, abnormal branching blood vessels. Pearl says this effectively destroyed the blood vessels making up the AVM.

Pearl was able to select which blood vessels to block using a contrasting dye injected into the tangle immediately prior to the glue-sealing embolization treatment. Using digital subtraction angiography (DSA) – in which computer software removes the images of bones and other organs, showing only the blood vessels – Pearl was able to track reduced blood flow through the AVM after every individual embolization. After three major blood vessels were sealed, blood flow through the tangle became nearly invisible on the DSA images.

Pearl cautioned that the procedure she and her team used is riskier than traditional AVM therapies. Typically, says Pearl, an assistant professor at the Johns Hopkins University School of Medicine who sees an AVM patient about once a week, interventional neuroradiologists and surgeons use the glue sealant to destroy -- from the inside -- the larger, misshapen arteries, using catheters through major blood vessels elsewhere in the body.

This “inside-in” approach usually lowers the risk of any life-threatening bleeding from burst arteries. However, scarring and postsurgical infections from Adams’ earlier procedures led Pearl and plastic and reconstructive surgeon Amir Dorafshar, M.D., to decide in favor of an “outside-in” approach. Although, other surgeons had ruled Adams situation too risky for further surgery, Pearl and Dorafshar thought success was still possible if Adams AVM could be sealed.

Once the tangle was glued shut, Dorafshar threaded a protective line of sutures around Adam’s facial outgrowth, as protection against any sudden blood loss during Adams’ reconstructive surgery, performed immediately after embolization. In that operation, lasting almost four hours, he cut out the destroyed AVM tangle and put Adams’ upper lip back together, repairing the mucosa, muscle and skin, and re-aligning her nose.

“Our success with this alternative outside-in approach shows our ability to look at medical problems from a different perspective and the potential capabilities for treating what was once considered untreatable,” says Pearl. “People with complex vascular malformations require individualized treatment plans that rely on close collaborations across physician specialties and disciplines.”

According to Pearl and Dorafshar, Adams will need three months to fully recover and will require at least one more operation to repair facial scarring.