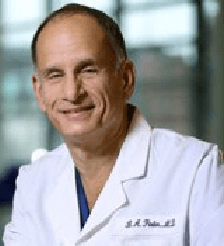 Bruce A. Perler, M.D., M.B.A., a Johns Hopkins vascular surgeon; the Julius H. Jacobson II, M.D., Professor of Vascular Surgery; vice chair for clinical operations and financial affairs for the Department of Surgery; and chief emeritus of the Division of Vascular Surgery and Endovascular Therapy, will become president of the Society for Vascular Surgery on June 20.

The society is the largest vascular surgery organization in the world, with more than 5,000 U.S. members in academic and community-based practice, and with an expanding international membership. It was founded in 1947 and is composed primarily of vascular surgeons, though it also counts podiatrists, vascular research scientists, vascular nurses and physician assistants among its members.

The mission of the society is to promote vascular health by advancing the science and practice of vascular disease management. Among the president’s many responsibilities are managing and balancing a multimillion-dollar budget, chairing a board of directors of more than two dozen vascular surgery leaders, overseeing the activities of four governing councils and 26 committees, and running an annual meeting with several thousand attendees.

“In my term as president,” Perler says, “I’m committed to promoting the brand of the Society for Vascular Surgery, and vascular surgeons, as the comprehensive leaders in the diagnosis, medical, endovascular and surgical management of patients with the entire spectrum of circulatory disease to patients, referring physicians, the government and the media. I’ve also begun to work closely with our executive director in formulating a 10-year budget plan to maintain the financial success of the society in our rapidly changing health care environment.”