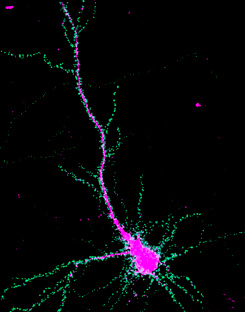 Researchers at Johns Hopkins have found out how a protein crucial to learning works: by removing a biochemical “clamp” that prevents connections between nerve cells in the brain from growing stronger. The finding moves neuroscientists a step closer to figuring out how learning and memory work, and how problems with them can arise. A report on the discovery appears Jan. 7 in the journal Neuron.

Animals learn and form memories when connections called synapses among brain cells form and grow stronger. Researchers have long known that a crucial step in the process is the flow of calcium ions into the synapse area, but “what happens next has been a mystery for 25 years,” says Richard Huganir, Ph.D., director of the Solomon H. Snyder Department of Neuroscience at the Johns Hopkins University School of Medicine. Previous studies suggested the calcium activates a protein called CaMKII, but CaMKII’s precise role in the process remained unknown.

To find it, research associate Yoichi Araki, Ph.D., added chemicals to lab-grown neurons to spur them to form stronger connections and saw that at rest, a protein called SynGAP was concentrated in so-called dendritic spines that form synapses with other cells — a pattern previous experiments also had identified.

The research team found that SynGAP is usually clamped to the “scaffolding” that gives dendritic spines their structure. There, it prevents the start of a chain reaction of chemical signals known as Ras, which is needed for learning. An influx of calcium into the synapse activates CaMKII, which in turn unhooks SynGAP from the cells’ scaffolding and spurs Ras signaling to begin.

Studies at other institutions have identified mutations in the gene for SynGAP associated with autism and intellectual disability. To see how these mutations affect the protein’s function, the Johns Hopkins research team altered their lab-grown cells so that they had genes with one of three of these mutations. All three of the disability-associated mutations showed similar effects: Compared to normal neurons, there was less SynGAP in synapses when they were at rest, but activating CaMKII did not noticeably change anything.

“This gives us a much clearer idea of how some SynGAP mutations cause problems in the brain,” Huganir says. The findings may one day lead to drugs or other interventions that would lessen the effects of the mutations, he says.

Other authors on the paper are Menglong Zeng and Mingjie Zhang, both of Hong Kong University of Science and Technology.