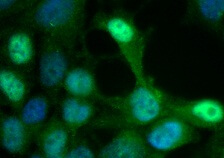 Prostate cancer patients whose tumors contain a shortened receptor called AR-V7 are less likely to respond to two widely used drugs for metastatic prostate cancer, according to results of a study led by researchers at Johns Hopkins’ Kimmel Cancer Center and Brady Urological Institute. If large-scale studies validate the findings, the investigators say men with detectable blood levels of AR-V7 should avoid these two drugs and instead take other medicines to treat their prostate cancer. A report on the work is described online Sept. 3 in the New England Journal of Medicine.
The study evaluated two groups of 31 men with prostate cancer that had spread and whose blood levels of prostate-specific antigen (PSA) were still rising despite low testosterone levels. Investigators gave each man either enzalutamide (Xtandi) or abiraterone (Zytiga) and tracked whether their PSA levels continued to rise, an indication that the drugs were not working. In the enzalutamide group, none of 12 patients whose blood samples tested positive for AR-V7 responded to the drug, compared with 10 responders among 19 men who had no AR-V7 detected. In the abiraterone group, none of six AR-V7-positive patients responded, compared with 17 responders among 25 patients lacking AR-V7.
Enzalutamide and abiraterone have been very successful in lengthening the lives of about 80 percent of patients with metastatic prostate cancer, says Emmanuel Antonarakis, M.D., assistant professor of oncology at Johns Hopkins, but the drugs do not work in the remaining 20 percent of patients.
“Until now, we haven’t been able to predict which patients will not respond to these therapies. If our results are confirmed by other researchers, a blood test could use AR-V7 as a biomarker to predict enzalutamide and abiraterone resistance, and let us direct patients who test positive for AR-V7 toward other types of therapy sooner, saving time and money while avoiding futile therapy,” says Antonarakis.
Prostate cancer thrives on male sex hormones (or “androgens”), including testosterone and dihydrotestosterone. Enzalutamide and abiraterone target proteins called androgen receptors and block the receptors’ ability to activate prostate cancer cells. AR-V7 is a shortened form of the androgen receptor that lacks a binding spot targeted by enzalutamide and abiraterone. With no binding spot for the two drugs, AR-V7 is free to manipulate prostate cancer cells’ genetic material, which makes the cancer cells grow and spread.
“In this study, we’ve connected AR-V7 detection with resistance to two popular drugs for prostate cancer, and we’ve done it in a non-invasive way,” says Jun Luo, Ph.D., associate professor of urology at the Brady Urological Institute at Johns Hopkins. “We hope this study will motivate scientists and clinicians to conduct additional studies on AR-V7 and to develop effective therapies to overcome resistance.”
Luo, who first identified AR-V7 in 2007, and Antonarakis also tracked patients’ progression-free survival (the length of time a patient lives with the disease but does not get worse) and overall survival.  They found that, in men receiving enzalutamide, progression-free survival was 2.1 months in AR-V7-positive patients and 6.1 months in AR-V7-negative patients, while overall survival was 5.5 months in AR-V7-positive men and up to 9 months in AR-V7-negative men. Similarly, in men receiving abiraterone, progression-free survival was 2.3 months in AR-V7-positive patients and up to 6 months in AR-V7-negative patients, while overall survival was 10.6 months in AR-V7-positive men and up to 12 months in AR-V7-negative men. The investigators caution that most of the study patients had advanced disease and received multiple prior therapies, so their outcomes may not be generalizable to all men with prostate cancer.
“Patients whose blood samples contained AR-V7 got no benefit from either enzalutamide or abiraterone,” says Antonarakis. He adds that AR-V7-related molecules could appear in patients’ blood samples at the very start of therapy or acquired later, after therapy has begun. He says, “This test could be used before starting enzalutamide or abiraterone therapy, and if the test shows the presence of AR-V7, patients may opt for a different therapy. It could also be used to monitor patients receiving enzalutamide or abiraterone for AR-V7, providing an indication these drugs may not work for much longer.”
The study was funded by the Prostate Cancer Foundation, the Department of Defense, and the National Institutes of Health’s National Cancer Institute (CA058236, CA006973).
Other scientists involved in the study were Changxue Lu, Hao Wang, Brandon Luber, Mary Nakazawa, Jeffrey C. Roeser, Yan Chen, Helen L. Fedor, Tamara L. Lotan, Qizhi Zheng, Angelo M. DeMarzo, John T. Isaacs, William B. Isaacs, Rosa Nadal, Channing J. Paller, Samuel R. Denmeade, Michael A. Carducci, and Mario A. Eisenberger from Johns Hopkins; and Yidong Chen and Tabrez A. Mohammad from the University of Texas Health Science Center.