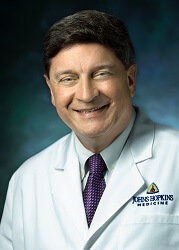 “Dr. Cohen is determined that Johns Hopkins’ pediatric neurosurgery division becomes recognized as the premier program of its kind in the world,” says Henry Brem, M.D., Harvey Cushing Professor and director of the Department of Neurosurgery.

During the five years that Cohen headed Boston Children’s Hospital neurosurgery, it was ranked by U.S. News & World Report as the nation’s top such program.

Before joining Harvard’s faculty in 2011, Cohen spent 17 years as chief of pediatric neurosurgery and the inaugural surgeon-in-chief at Rainbow Babies and Children’s Hospital/Case Western Reserve University, where his leadership garnered national attention for its program.

Cohen, who has written 170 peer-reviewed journal articles and book chapters, as well as published two textbooks, plans to create robust clinical and research fellowships, develop stronger partnerships with neurology and adult neurosurgery, and increase the Department of Neurosurgery’s collaboration with his predecessor, George Jallo, M.D., who now heads neurosurgery at Johns Hopkins’ All Children’s Hospital in St. Petersburg, Fla.

Cohen assumes his duties at Johns Hopkins on May 23.

He will be joined in the Division of Pediatric Neurosurgery by his wife, Shenandoah “Dody” Robinson, M.D., a nationally recognized expert in the surgical treatment of epilepsy and spasticity. A prolific researcher and award-winning teacher, Robinson comes to Hopkins as a professor of neurosurgery, PAR. She performs basic and translational research in perinatal brain injury and repair.