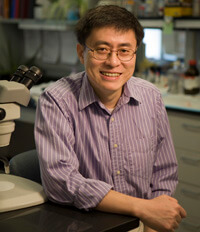 1 2 3
Xinzhong Dong, M.D., Ph.D., an assistant professor of neuroscience and member of Hopkins’ Institute of Basic Biomedical Sciences Center for Sensory Biology, has been at Johns Hopkins since 2004

March 26, 2009- Three researchers at the Johns Hopkins University School of Medicine have been named early career scientists by the Howard Hughes Medical Institute (HHMI). Xinzhong Dong, Ph.D., Joshua Mendell, M.D., Ph.D., and Sinisa Urban, Ph.D., all will remain faculty at Hopkins but also become employees of HHMI, which will provide research funding and salary for the next six years.

“We are thrilled for Xinzhong, Josh and Sin for being recognized by Hughes for the quality of their work,” says Chi V. Dang, M.D., Ph.D., the vice dean for research at Johns Hopkins. “At the same time, this is an honor for all of Johns Hopkins, to have not only one but three young investigators selected.”

The award is given to recognize “the nation's best biomedical scientists at a critical early stage of their faculty careers, and to provide them with flexible funding to develop scientific programs of exceptional merit.”

Dong, an assistant professor of neuroscience and member of Hopkins’ Institute of Basic Biomedical Sciences Center for Sensory Biology, has been at Johns Hopkins since 2004. His team is taking a multidisciplinary approach to understanding the mechanisms behind sensation, including pain, itch and touch. All three so-called somatosensations are controlled by nerves in the dorsal root ganglia, a bundle of nerves that carries information through the spinal cord into the brain. To do their research, the team has developed new molecular tools to examine nerve cell circuitry and communication. They would like to learn which nerve cells mediate which sensation, how these nerve cells relay information to other cells and which proteins within these cells actually sense an itch or gentle touch.

Mendell has been an assistant professor of pediatrics and member of Hopkins’ McKusick-Nathans Institute of Genetic Medicine since 2004. His team studies microRNAs, how they function and how they are controlled in normal cells and under disease conditions. MicroRNAs, small RNA molecules that affect the stability of messages and the amount of proteins made by genes, can control many aspects of development and cell function and often are altered in diseases such as cancer. Mendell’s team was one of the first to identify microRNAs that are involved in cancer-promoting molecular pathways. In addition to their work on cancer, the team also studies how microRNAs are controlled within a cell and how that control is lost in disease states.

Urban has been an assistant professor of molecular biology and genetics since 2006. His team studies enzymes called rhomboid proteases that are found in a cell’s membrane. Urban discovered that rhomboid proteases catalyze a biochemical reaction that cuts proteins. His research team aims to understand the biochemical principles governing how catalysis occurs embedded within the membrane, which is a new frontier in biochemistry. They also focus on how deadly pathogens such as malaria and related parasites use rhomboid proteases to infect human cells, and how parasitic amebae use rhomboids to evade the immune system. Uniting these studies may lead to new drug development because targeting rhomboid enzymes with inhibitors may be an effective way to treat multiple infectious diseases.