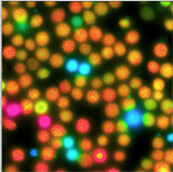 1 2
This is a population of human immune cells preloaded with a dye that fluoresces pink/red when calcium is present. One of the key steps involved in turning on the immune response is the prolonged accumulation of calcium inside of immune cells. When the Johns Hopkins researchers stimulated an immune cell, setting the signaling event in motion, they noticed that lots of calcium flushed into the cell and lingered there (video 1). However, when they pretreated the immune cells with clofazimine, the calcium rush was much less and it didn’t hang around as long (video 2). Without sustained calcium, the immune system isn’t activated; as a result, autoimmune disease – caused by the uncontrolled activation of a subset of immune cells that attack a person’s own tissues – will not occur. * click on image for video

A century-old drug that failed in its original intent to treat tuberculosis but has worked well as an antileprosy medicine now holds new promise as a potential therapy for multiple sclerosis and other autoimmune diseases.

“We never expected that an old antibiotic would hit this target that has been implicated in multiple sclerosis, psoriasis and type 1 diabetes,” says Johns Hopkins pharmacologist Jun O. Liu.  “People have been working for years and spending tens of millions of dollars on developing a drug to inhibit a specific molecular target involved in these diseases, and here, we have a safe, known drug that hits that target,” known as the Kv1.3 potassium channel.

The finding about clofazimine, a synthetic compound made in the 1890s, is reported in Public Library of Science (PLoS One) by Johns Hopkins researchers, who uncovered the drug’s latest potential during an ongoing and exhaustive screening of FDA-approved drugs designed to identify new uses for them. The Hopkins team was specifically hunting for immune system control agents within the Johns Hopkins Drug Library, a collection assembled over the past seven years by Liu and colleagues of more than 3,000 drugs in pharmacies or being tested in phase II clinical trials.

The Johns Hopkins scientists say they were surprised to discover that clofazimine interferes with a molecular pathway important in orchestrating the human body’s immune response.

“Until now, clofazimine’s presumed target was not human cells, but bacteria,” says Liu, professor of pharmacology and molecular science, Johns Hopkins University School of Medicine. “But we discovered the drug has a tremendous effect on human immune cells that are heavily involved in both the initiation and execution of an effective immune response.”

More specifically, Liu’s team sought drugs that stop the molecular signaling pathway that leads from the surface of an immune system cell to the cell’s interior, where the signal turns on genes important in activating the immune response, Liu says. In autoimmune diseases, a person’s own white blood cells, meant to fight infection or disease, are misguided to target and attack the body’s own cells, damaging or destroying them.

To search for such compounds, the team first engineered cells to mimic an immune cell’s natural signaling pathway, a complex and circuitous route from the cell surface to the genetic switch inside. They then subjected these specialized cells to the Drug Library, one at a time, and identified more than 200 hits — drugs that inhibited the signaling system significantly, by more than 50 percent.

When they compared the potency of the 200 with each other, “clofazimine was the hit with the highest inhibitory activity,” Liu says.

One of the key steps involved in turning on the immune response is the prolonged accumulation of calcium inside of immune cells, Liu explains. When the researchers stimulated an immune cell, setting the signaling event in motion, they noticed that lots of calcium flushed into the cell and lingered there. However, when they pretreated the immune cells with clofazimine, the calcium rush was much less and it didn’t hang around as long.

“This let us conclude that clofazimine was blocking the calcium influx into the immune cells,” Liu says. “Without enough calcium getting inside a cell, the signaling pathway that turns on the immune response was short-circuited.” The Johns Hopkins group also showed that clofazimine tamps down the presence of free calcium in immune cells by disrupting a potassium channel. The combined effect is to shut down a signaling pathway involved in autoimmune disease.

In addition to Jun O. Liu, authors of this paper are Yunzhao R. Ren, Fan Pan, Curtis R. Chong, Jing Xu, Yongjun Dang, and Jin Zhang, all of Johns Hopkins; Reinhold Penner, Suhel Parvez, and Andrea Fleig, all of the University of Hawaii; and Hongsi Jiang of Northwestern University.