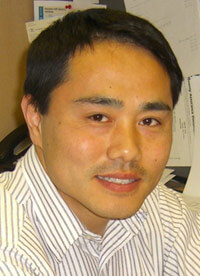 Duojia Pan, Ph.D., a professor of molecular biology and genetics at the Johns Hopkins University School of Medicine, is one of 56 new members of the Howard Hughes Medical Institute. Combined, the new class of investigators will receive more than $600 million in research funding.

Pan studies how organs know to grow to a specific size and shape. While much work has focused on the signals that help cells choose what roles they will play in specific tissues and organs, not much is known about how all the cells together determine the entire size of the organ.

“The question of organ size is really interesting but tough to get a handle on because there are so many different cell types involved and so many things going on during development,” says Pan. “I am honored to be chosen to receive this funding because it will allow us to pursue some of these tougher problems.”

To tackle the problem of organ size, Pan turned to fruitflies and looked for mutations in flies that cause organs to grow larger than normal. He and his research team identified a gene called hippo that, when mutated in the cells of the developing fly eye, cause the eyes to grow abnormally large. Further study revealed that hippo is part of a signaling relay that conveys the message to the cell to stop growing.

“The fly is a great system, but we were curious to see if the hippo pathway works in other organisms, too,” he says. So his team engineered mice to lack hippo signaling activity in the liver and found that the livers grew to five times their normal size. Moreover, these mice developed cancerous livers.

“Cancer is another example of overgrowth. We’re working hard now to see how hippo might be involved in cancer progression,” says Pan.

The Howard Hughes Medical Institute, a non-profit medical research organization that ranks as one of the nation's largest philanthropies, plays a powerful role in advancing biomedical research and science education in the United States. In the past two decades HHMI has made investments of more than $8.3 billion for the support, training, and education of the nation's most creative and promising scientists.  HHMI's principal mission is conducting basic biomedical research, which it carries out in collaboration with more than 60 universities, medical centers and other research institutions throughout the United States.